May 24, 2017 Africa/International Comments Off on Kenyan government hauled before African Court 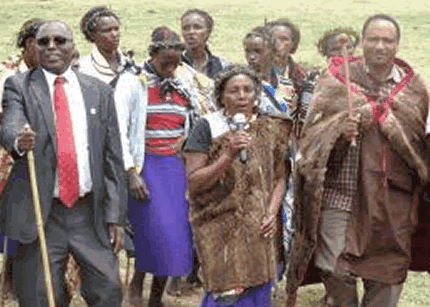 The Government of Kenya faces the African Court on Human and Peoples Rights, in Arusha, Tanzania as it delivers judgement in a long-awaited case brought before it, by the Ogiek indigenous peoples for consistent violations and denial of their land rights.

The African Court will on Friday May 26 deliver judgement.

“This case is of fundamental importance for indigenous peoples in Africa, and particularly in the context of the continent-wide conflicts we are seeing between communities, sparked by pressures over land and resources,” Ms Lucy Claridge, Minority Rights Group International’s (MRG) Legal Director stated in Arusha.

She said: “Ultimately the Court will be ruling on the crucial role of indigenous peoples in the conservation of land and natural resources, and consequently, the mitigation of climate change in a region currently ravaged by drought and famine”.

The Ogiek indigenous people, of whom 35,000 are the victims in this landmark case, live in the Manu Forest Complex in the Rift Valley of Kenya.

Legal document available to the Ghana News Agency in Accra indicated that the Ogiek are one of the last remaining forest-dwelling communities and among the most marginalised indigenous peoples in Kenya.

In their statement of claim, the Ogiek alleged the violations of their rights to life, property, natural resources, development, religion and culture by the Kenyan government under the African Charter on Human and Peoples’ Rights, to which Kenya is a signatory.

This is the first time the African Court, in operation since 2006, will rule on an indigenous peoples’ rights case and is by far the largest ever case brought before the Court, anAfrican Court legal expert explained.

It was originally lodged with the African Commission on Human and Peoples’ Rights, but was referred for the first time in history to the African Court on the basis that it evinces serious and mass human rights violations.

The MRG, Ogiek Peoples’ Development Programme (OPDP) and CEMIRIDE were the three original Complainants before the African Commission.

Mr Daniel Kobei, Executive Director of OPDP explained that: “This judgment will be a huge milestone for the Ogiek community.

“We are optimistic that it will be positive, and crucially, that it will be respected by the Kenyan government, including implementation, so that Ogiek can feel complete and enjoy all the basic rights like every other Kenyan”.

The case was heard by the African Court in November 2014. MRG delivered an oral intervention on behalf of the original Complainants, whilst two Ogiek community members and other expert witnesses gave testimony.

The MRG supported 25 Ogiek community members to attend the hearing, and supported a further 40 to view the hearing in Kenya via a live stream from the African Court.

In March 2013, the African Court issued a provisional measure order requiring the Kenyan Government to stop land transactions in the Mau Forest and refrain from taking any action which would harm the case, until it had reached a decision. This order unfortunately had not been respected.

For decades, the Ogiek have been routinely subjected to arbitrary forced evictions from their ancestral land in the Mau Forest by the government, without consultation or compensation.

This has had a detrimental impact on the pursuit of their traditional lifestyle, religious and cultural life, access to natural resources and their very existence as an indigenous people. The Ogiek have a spiritual, emotional and economic attachment to the forest. They rely on it for food, shelter and identity.

The African Court is a continental court established by African countries to ensure the protection of human and peoples’ rights in Africa and complements and reinforces the functions of the African Commission on Human and Peoples’ Rights.

As at May 2017, only eight of the 30 States Parties to the Protocol had made the declaration recognizing the competence of the African Court to receive cases from NGOs and individuals.

The African Court has jurisdiction over all cases and disputes submitted to it concerning the interpretation and application of the African Charter on Human and Peoples’ Rights, (the Charter), the Protocol and any other relevant human rights instrument ratified by the States concerned.

The Court is composed of eleven Judges, nationals of Member States of the African Union.

The Judges of the African Court are elected, after nomination by their respective States, in their individual capacities, from among African jurists of proven integrity and of recognized practical, judicial or academic competence and experience in the field of human rights.

The Judges of the African Court elect from among themselves, a President and Vice-President, who serve a two year term. They can be re-elected only once.

The President of the African Court resides and works on a full time basis at the seat of the Court, while the other ten Judges work on a part-time basis.

In the accomplishment of his/her duties, the President is assisted by a Registrar who performs registry, managerial and administrative functions of the Court.

The Court may receive cases filed by the African Commission of Human and Peoples’ Rights, State parties to the Protocol or African Inter-governmental Organisations.

Non-Governmental Organisations with observer status before the African Commission and individuals can also institute cases directly before the Court as long as the state against which they are complaining has deposited the Article 34(6) declaration recognising the jurisdiction of the Court to accept cases from individuals and NGOs.

As at March 2017, the Court had received 124 applications and finalised 32 cases. Currently, the Court has 92 pending cases and four Requests for advisory opinion.