The only pontoon on Volta Lake stops operation

May 23, 2017 General News Comments Off on The only pontoon on Volta Lake stops operation 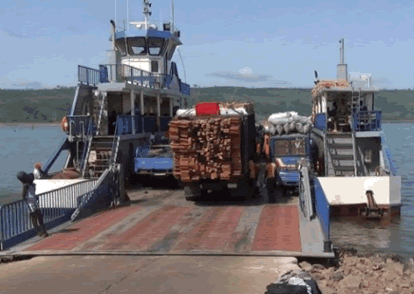 The only pontoon that transport heavy loads and passengers across the Volta Lake from Yeji in Brong-Ahafo to Makango in the Northern regions has halted operations for some period now.

This, according to authorities at the Volta Transport Company, was due to the lack of a standard landing site along the lake that would facilitate easy landing of the pontoon.

The unfortunate situation, residents mostly traders in the fishing communities told the Ghana News Agency (GNA), has slowed down economic activities and they appealed to the government to come to their aid.

Captain William Agbenyenu, operator of the (Akrade pontoon), confirmed to the GNA that the absence of an appropriate landing site has made operations difficult.

He said a berth was urgently needed for the pontoon to start operation or else something unfortunate could happen on the Volta Lake.

Capt Agbenyenu said every year the pontoon ceased operations around August because of the seasonal low water level of the Lake adding that it could operate all year round if alternative canal (routes) were developed.

He said as a result of the temporary halt in their service, intense pressure has mounted on the Volta one water bus, a small ferry which carried only 52 passengers to and from Yeji and Makango.

Mr Seth P Ababio, an electrical engineer attached to the pontoon, said the situation had since been reported to the company’s head office at Akosombo.

He said the six-month-old pontoon was crossing the lake twice daily, and its stoppage was seriously affecting economic activities in the area.