Home / Feature Articles / The newspaper industry in Ghana is dying

The newspaper industry in Ghana is dying

May 23, 2017 Feature Articles Comments Off on The newspaper industry in Ghana is dying 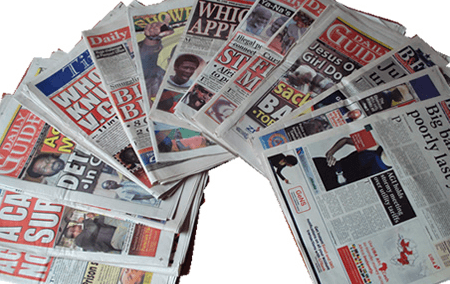 For the last 16 years, the declining nature of newspapers in Ghana has paradoxically, not catch the attention of many.

Ironically the existence of newspapers have apparently no negative effect to Ghanaians which might necessitate its extinction.

Notwithstanding this, the arrival of Television in the 1950s originated the declining nature of newspapers as most people preferred it as their source of daily news.

The outburst of the Internet in the 1990s has also augmented the variety of media choices available to the average reader and at the same time cutting into newspapers’ monolithic supremacy as the monopoly source of news.

Indeed, it is an undeniable fact that, both the Television and the Internet brings news to the consumer faster and in a more visually styled fashion than newspapers which are inhibited by their physical and manufacturing format a well as distribution

The source of revenue to the newspaper companies have been through advertisement but these mediums have also offers advertisers with moving images and sound as against the still images of the print.

The Internet search function also allows advertisers to tailor their pitch to readers who have revealed what they are seeking and gets feedback from their audience.

These mediums had been continually rendering the patronage of the newspaper not suitable thereby causing a continuous decline in the profits of these mediums.

Press baron Rupert Murdoch once described the profits flowing from his stable of newspapers as “rivers of gold”, but years later said, he was reported saying “sometimes rivers dry up”.

The Buffalo News owner, Warren Buffett, once wrote that “if cable and satellite broadcasting, as well as the Internet, had come along first, newspapers as we know them probably would never have existed”.

In speaking to a section of Ghanaians on the matter, Mr Mahmud Mohammed Banda, a news vendor said for having being in the business of selling newspapers for 40 years, the sales have not been as brisk as it used to be in the past.

He said the activities of TV and radio stations were dealing a blow to the newspaper business.

He said the morning paper reviews that were carried out across the country by the various media houses had had a negative impact on the sales of newspapers.

The news vendor said that at least “in some places like Nigeria, these media houses do not review newspapers until somewhere mid-day” and by then “people might have finish buying the papers at that time”.

Mr Banda indicated that this singular act coupled with the introduction of smart phones had made their market very difficult noting that since their customers could now get stories from their cell phones.

Mr Yaw Amoako who is also a news vendor said though depending on the particular story that was in circulation, “I can sell about five papers in a day”.

A lotto paper vendor, Mr Francis Kwabena related that his business was only active when there was a bumper winning in a particular week.

One issue is whether the newspaper industry is being hit by a cyclical trough and will recover, or whether new technology has rendered newspapers archaic in their traditional format.

In the quest to seeking solutions to curb the continuous developing problem, most newspaper industries have moved to the online service to surge their reader base thereby increasing their advertising and eventually maximising profit.

Going online has created more prospects for newspapers and competing with broadcast journalism in presenting breaking news in a timelier manner.

The credibility and strong brand recognition of well-established newspapers, and the close relationships they have with advertisers, are also seen by many in the newspaper industry as strengthening their chances of survival.

Evgeny Lebedev, owner of The Independent newspaper in the UK, said: “The newspaper industry is changing, and that change is being driven by readers.

“They are showing us that the future is digital. This decision preserves the Independent brand and allows us to continue to invest in the high-quality editorial content that is attracting more and more readers to our online platforms.”

Twenty one years ago, The New York Times entered the Internet age with a sense of minimising cost and maximising profit and gaining traffic. With its entry on the Web, The New York Times reporter, Peter H. Lewis wrote: “The Times is hoping to become a primary information provider in the computer age and to cut costs for newsprint, delivery and labour.”

The move to online has made the newspaper`s monthly audience grew 33.3 per cent in the last 12 months to nearly 70 million global unique users. The site is profitable and is expected to see revenue growth of 50 per cent this year.

Newspaper industries when moved to the online actually increases their audience and eventually their profit.

Nonetheless, newspapers industries, including the television and radio stations must as well deem it necessary to move to the social media as it has the largest audience with Facebook and Google being the duopolistic and market with earnings of about halve of the mobile ad market.