May 19, 2017 General News Comments Off on Minister for works and housing tours sea defense project 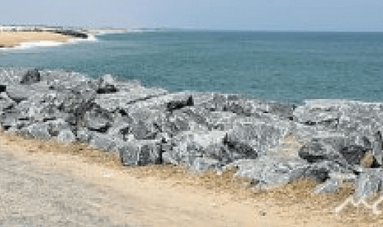 Mr Samuel Atta Akyea, the Minister for Works and Housing, says the government recognizes the immerse contribution of traditional authorities towards the development of the country.

He said government would continue to strengthen the collaboration and solicit their wise counsel in accelerating the development and growth of the country.

The Minister for Works and Housing said this when he paid a courtesy call on Nana Kobina Attom III, the chief of Aboadze, during a visit to the twin towns; Aboadze/Abuesi to inspect the sea defense project being undertaken by ZARA developers.

At the palace, the chief requested that sanitary facilities be provided for the communities to halt open defecation which he said was gradually marring the beauty of the work done by the contractors.

Nana Attom III called on government to help speed up the process of paying royalties on the over 421.8 acre land allocated to the Volta River Authority.

Mr Atta Akyea also promised to engage with the contractors to provide the needs of the community.

The second day of the minister’s tour took him to Nkontompo, New Takoradi, Adjua and Axim where similar facilities had been constructed to save the communities along the coast from the ravages of the sea.

In all, the minister expressed satisfaction at work done so far and the contractors disclosed that substantial work had been completed and that currently, the projects were in the defect liability stage.

Later, at the Regional Coordinating Council, the Minister engaged with Dr Kweku Afriyie, Western Regional Minister on government’s plan to provide affordable housing scheme for Ghanaian workers and the need for litigation free lands to encourage investors to confidently undertake such partnerships.

He said the Pension funds would be used to secure such houses for the ordinary worker adding, “We are going to revive the Bank for Housing and Construction to ensure a realistic mortgage arrangement for the future”.