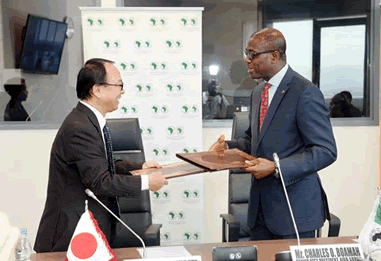 The African Development Bank (AfDB) and the Japanese government have signed an agreement for a $300 million facility concluding the second phase of the joint Enhanced Private Sector Assistance (EPSA) initiative.

According to the Bank, the signing of the Exchange of Notes marks the conclusion of the second phase of the EPSA Initiative and the beginning of the third phase which was announced at the 6th Tokyo International Conference on African Development (TICAD) held in Nairobi, Kenya in August 2016.

“The third phase has a joint target (Japan plus AfDB) of $3 billion over the next three years,” the AfDB says.

It noted that the loan, worth Japanese yen 34.41 billion (equivalent to approximately $300 million) is intended to support private sector operations in Africa through the AfDB’s non-sovereign window.