Ghana to share oil and gas experience with Senegal

May 18, 2017 Oil & Gas Comments Off on Ghana to share oil and gas experience with Senegal 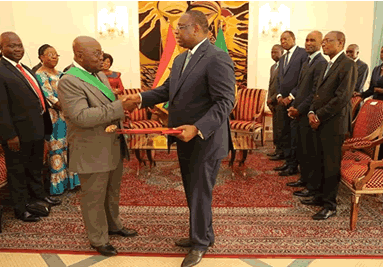 President Nana Addo Dankwa Akufo-Addo has indicated Ghana’s preparedness to share its experiences in the management of its oil and gas resources, as well as the measures taken to ensure the prudent and effective use of the proceeds from their sale with Senegal.

He said: “With the recent discovery of oil and gas in Senegal in commercial quantities, and with our experiences, I believe Ghana is well-equipped to share with you the dos and don’ts in the effective management of oil and gas revenues.”

President Akufo-Addo’s made the statement in response to the request put forward by the President of Senegal, Macky Sall, at a meeting held at the Presidential Palace in Dakar, to discuss possible areas of co-operation between the two countries.

President Akufo-Addo who is on the second phase of his ECOWAS tour to Senegal, Guinea and Cape Verde, has already toured the three countries bordering Ghana; Togo, Burkina Faso and Cote d’Ivoire- in a wider move to introduce himself to and deepen relations with countries in the ECOWAS region.

The tour would further the President’s quest to strengthen bilateral ties and to restate Ghana’s commitment to the ECOWAS project. He would in the month of May, pay official working visits to Nigeria, Benin, Liberia and Sierra Leone.

President Akufo-Addo explained that the production of oil and gas, and the revenues from the sale, presented the two countries with the perfect opportunity to transform the structure of their respective economies, from raw material producing and exporting ones to industrialised, value-added economies.

To this end, the two countries have resolved to create the necessary legal framework for the conduct of bilateral co-operation with Senegal soon to send a team to study Ghana’s nascent oil and gas industry and adopt best practices in the management of Senegal’s oil and gas resources.

Ghana, President Akufo-Addo told his Senegalese counterpart, was also seeking to deepen bilateral co-operation with Senegal in the areas of agriculture, particularly in the horticultural and fisheries sector, tourism, defence, trade, investment, and energy, amongst others.

“In the area of education, I believe that strengthening of co-operation between our two countries, especially in the learning of English and French languages by our youth, would be of immense benefit to us, as we seek to make the process of integration of West Africa real. To this end, my government intends to make the learning of the French language compulsory from basic to Senior High School level.

“Co-operation with Senegal in the training of French teachers would be helpful in ensuring the success of this policy. By the same token, I am keen to revive the yearly linguistic programme between the two countries which will enable Ghanaian students undertake proficiency courses in French at the famous Université Cheikh Anta Diop, in Dakar,” he said.

Reiterating his commitment to the ECOWAS project, President Akufo-Addo stressed the commitment of his government towards strengthening the ECOWAS Community.

He noted that With West Africa’s population set to reach some 500 million people in 20 years, there were immense opportunities to bring prosperity to West Africa, with hardwork, enterprise and creativity.

“The time for West African integration is now. Ghana and Senegal should be at the forefront of the process that will convert ECOWAS into a true regional market. A working, common regional market in ECOWAS has to be a very fundamental objective of all our peoples and governments in the region,” he said.

Touching on the situation in neighbouring Cote d’Ivoire, President Akufo-Addo maintained that peace and stability in the region were essential to the viability of the ECOWAS market.

“To that extent, all of us in the region are anxious to see the unfortunate events of the last few days in Cote d’Ivoire come to a rapid conclusion so that peace, law and order can be guaranteed in that key member state of ECOWAS. We must all encourage and support the initiatives President Alassane Ouattara is taking to find a satisfactory conclusion to the crisis, to the mutual benefit of all. We pray for God’s guidance for him and all the actors in the Ivorian situation,” he added.

President Akufo-Addo commended President Macky Sall for the strong leadership he had shown, since assuming the reins of office in Senegal, which had made the country to become the second fastest growing economy in West Africa, having grown at 6.6 percent in 2016, behind Côte d’Ivoire, and the fourth fastest in sub-Saharan Africa.

“Under your leadership, Mr. President, the agricultural, industrial and services sectors of the Senegalese economy have witnessed significant growths. Reforms and public investment under the Plan Senegal Emergent (PSE), together with your strong leadership, account for this. Long may it continue!!”

“Perforce, I must applaud you for the step you have taken to establish the industrial enclave at Diamniadio, which you are going to show me this afternoon, and the ultra-modern tramp system, the first in West Africa, to link Dakar to the industrial enclave. The success of these undertakings can only enhance the strength of the Senegalese economy,” President Akufo-Addo added.