May 14, 2017 ICT, Lead Comments Off on Ghana gets Africa’s first functioning radio telescope 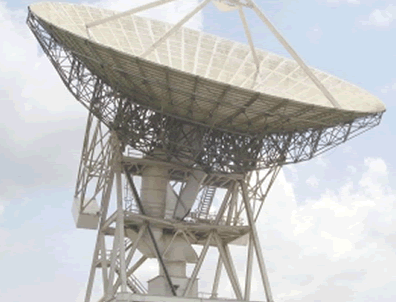 Ghana just made a big progress in astronomy as the country gets the first functioning radio telescope on the continent outside South Africa, according to a report by the publication, Scientific America.

The report indicates that engineers worked to convert an old telecommunications dis into a functioning radio telescope. The conversion was largely funded by South Africa, whose African Renaissance and International Co-Operation Fund and department of science and technology have contributed $9 million to the project.

The only country in Africa with an ongoing project to build a radio telescope is South Africa. The MeerKAT being built in South Africa, is expected to be completed in 2020 and it is the world’s largest radio telescope. When completed, it will connect 3,000 separate radio dishes, each about 50 feet (15 metres) wide.

The telescope in Ghana, is in Kuntunse near Accra. The report says it is the first of an array of such instruments expected to be built across Africa over the next five years in efforts geared towards developing skills of African astronomers in the long-term.

“It made its first observations this year and will be formally opened later in 2017,” the report said.

It also noted that when it is up and running, the Ghana telescope could be incorporated into the European Very Long Baseline Interferometry (VLBI) Network — a cluster of far-apart radio telescopes that together act as one large instrument.

“But astronomers also want to use it in a separate African VLBI Network (AVN). For that, plans are under way to convert telecommunications dishes in Zambia, Madagascar and Kenya by mid-2019. The arrival of undersea cables around Africa’s coast in the past decade has rendered these dishes obsolete for their original purpose. New telescopes could also be built in four other African nations by mid-2022,” it added.

“It’s a moment of pride and joy that we have reached this far,” T. L. Venkatasubramani, the project manager was quoted as saying.

He also added that science operations should begin next year.

The telescope has begun observing methanol masers — radio emissions that can arise from a number of celestial phenomena — and pulsars. The AVN, according to the report, will fill in geographic gaps in the global VLBI, improving imaging by increasing the range of distances and possible angles between the telescopes in the network. The more telescopes there are in a VLBI network, the more detail astronomers can see, it added.

The Kutunse satellite station was commissioned on August 12, 1981 and was operated by the Ghana Telecommunications Corporation until July 03, 2008 when Ghana Vodafone took over, as major shareholder after purchasing 70 per cent shares.