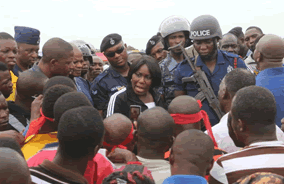 Some fisher-folks of Akplabanya in the Dangme West District in the Greater Accra Region, on Friday, protested against the inauguration of the pilot Fisheries Watch Volunteers taskforce.

The group numbering about hundred clad in red stormed the Otrokpe Basic School Park in Ada Foah in the Ada East District where the inauguration was being held.

They started agitating when the programme commenced and the few police personnel present could not restrain their activities.

The group made up of both men and women, who were chanting war songs and shouting “wa be kplen” meaning we will not agree, rushed to the high table when the volunteers were asked to come forward to be inaugurated.

Not satisfied with the hurling of insults on the volunteers, Mrs Elizabeth Afoley Quaye, Minister of Fisheries and Aquaculture Development and other dignitaries at the event, they violently started pulling down canopies erected, and throwing away of chairs, leading to many running from the scene.

The protest led to a holdup of the programme for over 30 minutes as officials from the Ghana Navy, Marine Police and the Police Service had a hard time controlling the fisher-folks.

Leaders of the group after being restrained apologized to the Minister and called for a dialogue to enable them table their concerns to the Ministry.

They said the operations of the task force to check illegal fishing activities would destroy their work as fishing was their source of livelihood.

Mrs Quaye said it was unfortunate that the group accused the Ministry of not properly constituting the volunteers’ task force explaining that the protesters could have just informed her outfit of their interest to be part of the enforcers who were made up of fisher-folks from the fishing communities in Greater Accra Region.

She said the aim of the Ministry and its development partners was to halt illegalities in the sector adding that the task-force was not put in place to fight fisher-folks.

She explained that they met with the fishermen associations and introduced the programme to them, after which some of them volunteered, and were trained to form the volunteer watch group, stressing that the Ministry had no hand in who was selected to join the watchdog group.