Developing countries continue to lose billions of dollars to illicit financial flows, in spite of the growing awareness and efforts to stem the tide and the negative effect of the menace on economies in the region, a new report by the NGO, Global Financial Integrity (GFI), has said.

According to the study released today May1, 2017, about $620 billion to $970 billion was drained from developing countries primarily through trade fraud in 2014. The report indicated that illicit inflows estimated at $1.4 trillion to $1.5 trillion also occurred in the same year.

The study says the combined value of illicit outflows and inflows account for 14.1 per cent to 24 per cent of total developing country trade over 2005 to 2014, and sub-Sahara Africa continues to suffer the largest illicit outflows as percentage of GDP, it added.

“This report highlights estimated illicit inflows to developing countries. It has become increasingly evident that both types of illicit flows represent a challenge to economic and social progress in the developing world,” it said.

The new report titled “Illicit Financial Flows to and from Developing Countries: 2005-2014,” is the first global study at GFI to equally emphasize illicit outflows and inflows.

It states that illicit financial flows from developing and emerging economies kept pace at nearly $1 trillion in 2014.

The report pegs illicit financial outflows at 4.2-6.6 per cent of developing country total trade in 2014, the last year for which comprehensive data are available. 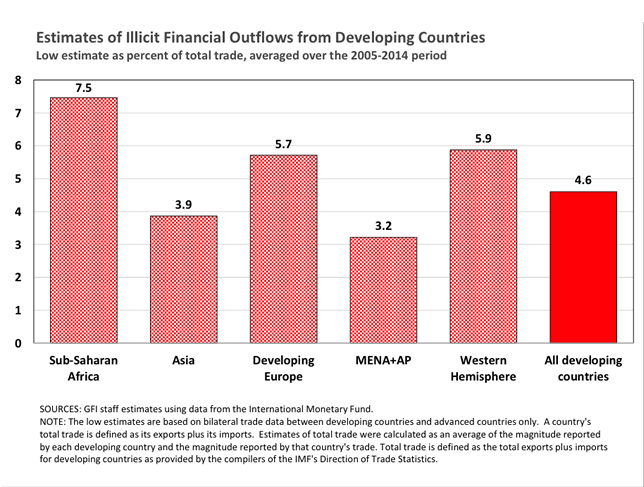 “Each is found to have remained persistently high over the period between 2005 and 2014. Combined, these outflows and inflows are estimated to account for between 14.1 and 24.0 per cent of developing country trade, on average,” the report said.

Raymond Baker, the President of GFI was quoted as saying in a press release copied to ghanabusinessnews.com,“The order of magnitude of these estimates, much more so than their exactitude, warrants serious attention in both the developing countries and the wealthier world.

Years of experience with businesses and governments in the developing world have taught us that the decision to bring illicit flows into a particular developing country often marks only the first phase of a strategy to subsequently move funds out of the country. Together, illicit inflows and outflows sap the crucial financial resources needed to reach the Sustainable Development Goals.”

It also found that total illicit financial flows (outflows plus inflows) grew at an average rate of between 8.5 per cent and 10.1 per cent a year over the ten-year period. 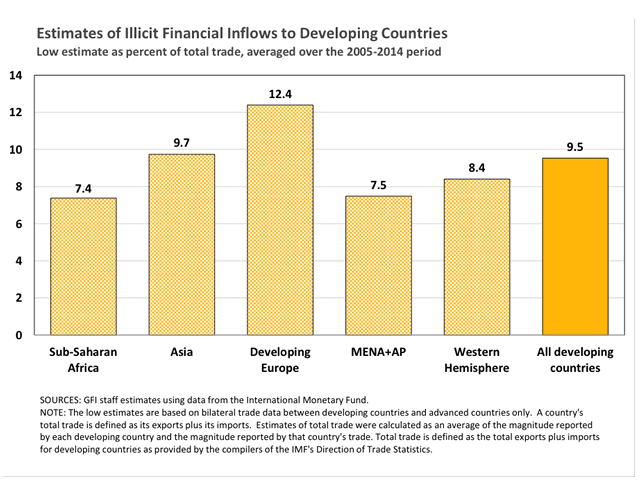 The GFI arrived at the findings by analyzing discrepancies in bilateral trade statistics and balance of payments data, as reported to the International Monetary Fund, in order to detect flows of capital that are illegally earned, transferred, and/or utilized.

The GFI indicated that since its last global report, released December 2015, the estimation methodology has been refined.

“These revisions generate a lower and upper bound for the estimates and account for several country idiosyncrasies,” it says.

The report recommends among others that to curb the harmful phenomena, countries should comply with the Financial Action Task Force recommendations to combat money laundering and terrorist financing, establish beneficial ownership regimes, and urged governments to significantly boost customs enforcement by providing appropriate training and equipment to better detect the intentional misinvoicing of trade transactions.

Pension scheme must be improved – Agyemang