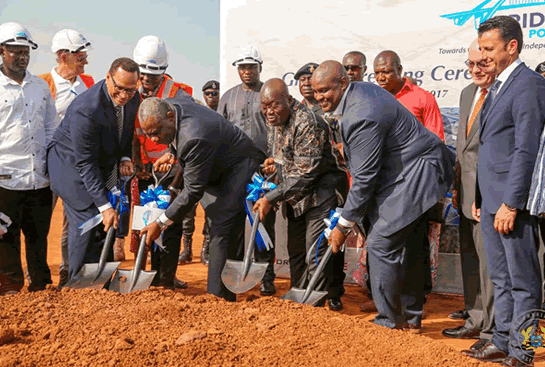 President Nana Addo Dankwa Akufo–Addo on Thursday cut the sod for the commencement of the construction of a 400-megawatt power plant expected to address Ghana’s long-term energy requirements.

The one billion dollar Bridge Power Project, the first in Africa, and the largest LPG-fired power plant in the world, would be located in Tema, near the Tema Oil Refinery and would be capable of being fueled by LPG, natural gas and diesel.

President Akufo-Addo, moments before breaking the ground for the start of the project said that facility was consistent with his government’s vision of making Ghana self-sufficient in electricity for industrial and domestic use, and to drive the country’s socio-economic development.

He said the Bridge Power Project, which is being developed by Early Power Limited (EPL), a consortium of three companies- Endeavour Energy, General Electric and Sage- would be one of several initiatives that government would introduce in the power supply value chain for a cost effective, efficient and sustainable energy sector.

The President noted that his intention to transform and grow Ghana’s economy industrially, could only be achieved when there was adequate, cost effective and sustainable power supply, saying his government’s quest to undertake the ambitious One District, One Factory and the One Village, One Dam Projects, would require significant amounts of electricity.

He was optimistic that the Bridge Power project by EPL would help government fulfil its vision of creating a modern, efficient, diversified, and financially sustainable energy economy.

Noting that Ghana had not fared well in negotiations with power producers in recent years, especially when such agreements were negotiated during emergency periods, President Akufo-Addo said Independent Power Producers could make reasonable profits with fair agreements that “does not sink the fortunes of the country”.

He said though government was a natural cheerleader for the private sector, and would do all it could to make it flourish, it would also protect the public purse and interest.

“For us lay persons, our interest in these agreements rest largely on cost, reliability and flexibility.

The power produced in this country must be cost effective, efficient and sustainable. I am reliably informed that the technology of this Early Power Project is one of the most efficient types in the world, and we are happy you chose it for Ghana,” he said.

He said Ghana’s power needs was high, and his vision and plan to develop the economy made it imperative to increase power generation capacity of the country efficiently, costs effectively and sustainably.

The President assured the project developers that they would find Ghana a great place to do business, and promised that the power Minister would work with them to address challenges that may arise during the implementation of the project.

He asked the energy consortium to operate according to rules and regulations pertaining to the energy sector and to treat their workers well, as government would do its part to address every challenge arising from the project’s implementation.

President Akufo-Addo urged Ghanaians to act in the spirit of good citizenship and use electricity efficiently.

Bridge Power is Greenfield power and liquefied petroleum gas import, storage and transportation infrastructure project that would address the longterm energy requirements of Ghana by providing over 17 percent of the country’s reliable generating capacity.

In its first phase, the project would provide 200 megawatts of generating capacity, and in the second stage, an additional 200 megawatts.

The energy plant employs state-of-the-art engines manufactured by General Electric, and is configured to be able to operate on Ghana’s own natural gas when available.

The project would help upgrade the Tema Oil Refinery’s LPG import and storage infrastructure and would help government leverage on its strategy of utilising natural gas as a long-term source of fuel for the energy sector.