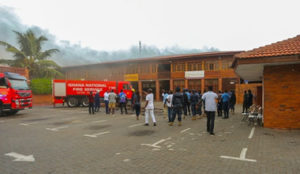 The Ghana National Fire Service (GNFS), has started investigating the causes of the fire outbreak that gutted property forming part of Dr Paa Kwesi Nduom’s business conglomerate at North Ridge in Accra, at the weekend.
The fire, which according to a staff of Amansan Television (ATV), started between 5:00 and 5.30pm on Saturday destroyed property running into thousands of Cedis belonging to GN Bank, ATV and Business Television Africa as well as some parts of Coconut Grove Hotel, all located at the North Ridge suburb of Accra.

He said a colleague staff noticed fire from the direction of an air conditioning unit in their studio which was reported immediately followed by the raising of alarm which alerted all the workers to run to safety.

The GNFS came to their rescue immediately an urgent call was placed.

But, the Greater Accra Operations Officer of the GNFS, Divisional Officer (DO I) Ofori Agyei, said the fire officers encountered delay and difficulties quenching the raging fire due to the nature of the building.

“It took us as long as three to four hours to bring the fire under control because of the nature of the place. The base of the storey building is made up of blocks but the upper floors are made up of wood,” he indicated.

The Operations Officer said the GNFS came to the scene with two fire tenders, few minutes after receiving the call around 5:11pm, but the intensity of the fire compelled them to mobilise more fire tenders to be able to bring it under control.

“We mobilised 19 fire tenders with our accoutrements including water tanks before we were able to fight the fire,” he added.
The DO I, Agyei said the GNFS was currently assembling those who were present in the office on the Saturday and when the fire started for interrogations to be able to ascertain the causes of the outbreak.

He assured that, the findings would be made public through the media to serve as guidelines to curbing the menace from recurrence and urged the public to maintain confidence in the GNFS saying, plans were far advanced by the GNFS to fight fire outbreaks in the country.