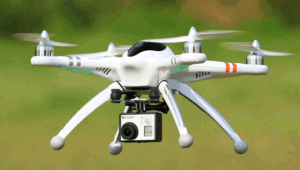 The consumer electronics market in Europe is buzzing with increasing sales of devices such as drones, TV sets, Bluetooth speakers, headphones and virtual reality glasses.

In 2016 some 1.8 million drones were sold in Europe alone, according to Jurgen Boyny, the Global Director, Consumer Electronics of GfK, one of the largest research companies in the world.

He also noted that consumer taste in the TV set segment is changing, noting that consumers now want more than traditional content.

He indicated that more people in Europe are owning more than one TV set. “There is 1.8 average TV ownership in Europe,” he said.

He said there are rising numbers of households that would also increase the number of TV sets owned. “20 per cent of refugees entering Europe will establish households, and they will own TV sets. Even if they unable to buy, friends will give them their old TV sets and then buy new ones,” he said.

He indicated that the average person in Germany, for instance watches 233 minutes of TV a day, noting however that viewing time in the UK has gone down by five minutes.

In his presentation, Dr. Andrea Sennheiser of Sennheiser said the company was focusing on developing technology that would reproduce reality and give the consumer immersive sound using 3D audio technology.

“This technology will increase the user’s emotional intensity and quality of sound by providing a sense of deep immersion,” he said.

He said the company was working on developing audio technology that can reproduce all the sounds that are made during live sports events.

To produce what he described as a ‘augmented reality’ in sound, he announced that the company has developed a virtual reality microphone that can be used for virtual reality productions.

By Emmanuel K. Dogbevi, in Lisbon, Portugal
Copyright ©2017 by Creative Imaginations Publicity
All rights reserved. This news item or any portion thereof may not be reproduced or used in any manner whatsoever without the express written permission of the publisher except for the use of brief quotations in reviews.

We want to become most business friendly economy in Africa – Bawumia