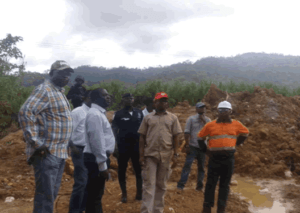 Kwabena Poku, a cocoa farmer, at Kwabeng in the Eastern Region, has expressed dismay over devastation caused by alluvial mining, which has polluted water bodies in the area.

He said the illegal miners, otherwise known as galamsey, had destroyed water bodies which they relied on for irrigation purposes.

He said about 100 water bodies including River Broma and River Kokoben had been polluted to the extent that farmers could not use them for irrigation any more.

He said the rivers served as sources of drinking water for inhabitants in the area and because of the pollution they now purchase sachet water, which was draining them financially.

The farmer expressed these concerns when the Minister of Lands and Natural Resources, Mr John Peter Amewu, on Wednesday, led a team comprising officials from the Minerals Commission, police personnel and the media to tour some mining sites in the Eastern Region.

The tour followed a three-week ultimatum the Minister gave to illegal miners to evacuate their machines and leave all mining sites.

The ultimatum expired on Tuesday, April 18.

Mr Poku said a mining firm, Extra Gold, which was operating in the area, mined inside the rivers and drained waste water used for its operations back into the rivers.

He, therefore, appealed to the Minerals Commission to halt the operations of the mining firm and compel them to reclaim the degraded lands and vegetation immediately.

Dr Tony Aubynn, the Chief Executive Officer of the Minerals Commission, said mining firms issued with licences were not supposed to mine 100 metres to water bodies.

He said the key stakeholders who were supposed to combat the menace had been complicit and, therefore, called for collaborative efforts to deal decisively with the challenge.

“Out of negligence and collusion some people perpetrated these acts, therefore, if you are a politician, Minerals Commission’s staff or a chief and if you fail to check these illegalities and ensure that the right thing is done, it implies that you are complicitly involved and the law would deal with you,’’ he said.

Akwasi Asabre, a small-scale miner and a Constituency Patron of the New Patriotic Party, said he had pulled his excavator from the mining site in compliance with the government’s directives and would not return it to the site.

He said the concession was released to him by M/A Resources, a large-scale mining firm in the area.