Ghana and France to deepen collaboration in maritime security 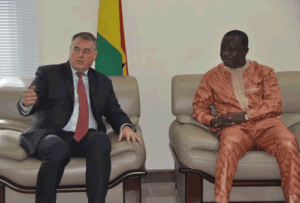 Mr Dominic Nitiwul, the Minister of Defence, says the Ministry is ready to collaborate with France to improve maritime safety and security in the Gulf of Guinea.

According to him, it was also high time Ghana cooperated with neighbouring countries to counter emerging threats like illegal fishing, piracy, other illegal operations, as well as challenges relating to oil and gas exploration in the Gulf of Guinea.

A statement issued in Accra by Colonel M’bawine Atintande (rtd), Acting Director Public Affairs, said the Ministry would therefore work with France to address these and other challenges.

Mr Nitiwul was speaking at the Square, when he met with the French Ambassador to Ghana, Mr Francois Pujolas, in Accra.

He expressed concerned about illegal small-scale mining activities which, he said, was destroying lands and water bodies.

He said he had received complaints from Cote d’Ivoire expressing displeasure with Ghana over activities of the illegal small-scale miners.

The Ivoirians had complained that water bodies that take their source in the Western Region of Ghana were heavily polluted and threatened the livelihood of their nationals.

“Illegal small-scale mining in Ghana had become an international challenge because some foreigners were involved. The Minister therefore asked France for support to curb the menace,” Mr Nitiwul added.

The Defence Minister reiterated the long-standing relations between Ghana and France and expressed gratitude to France for the partnership in military training and support to Ghana in other areas.

Mr Francois Pujolas urged the Defence Ministry to work together with Cote d’Ivoire to share information to counter security threats like terrorist attacks.

The French Ambassador was accompanied by the Defence Attaché at the French Embassy, Commander Guillaume Roquefeulle, among others.

LEAP has improved status of the poor – Prof Debrah