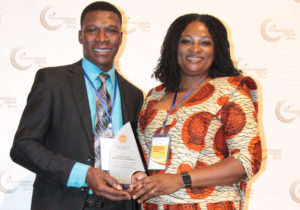 The National Philanthropy Forum has recognised and awarded Newmont Ahafo Development Foundation (NADeF), as the Corporate Foundation Philanthropist for the year 2016, a press release copied to ghanabusinessnews.com has said.

The foundation was selected above 17 other organisations to for the top award at this year’s 2017 Ghana Philanthropy Excellence Awards in Accra.

The award recognized the longstanding contribution of NADeF towards improving lives and supporting sustainable socio-economic development in the communities neighbouring the Ahafo mine, it said.

For nine years, the release pointed out, communities around Newmont Ghana’s Ahafo mine has initiated a number of sustainable development projects to improve the lives of their people. Following consultations between various interest groups in the communities and the Ahafo mine, the Newmont Ahafo Development Foundation was established in 2008 to drive the company’s social responsibility commitments to the communities.

Additionally, 8,000 educational scholarships have been awarded at the senior high, tertiary and apprenticeship levels, in addition to over 7000 infrastructural projects completed and handed over to the communities.

“We are honoured to be recognized for our effort in improving lives and driving socio-economic progress in Ahafo. NADeF will continue to expand its programmes to help even more women and children thrive in the communities,” Elizabeth Opoku Darko, the Executive Secretary of NADef, was quoted as saying in the release.

Currently, NADeF has accrued $24.5 million to fund various development initiatives through the Ahafo Mine’s contributions of $1 per ounce of gold produced and 1% annual net profit, it added.

“What makes NADeF unique from other Corporate Foundations is the local ownership and participation in the selection, execution and management of all projects in the host communities. In effect, the locals decide what their needs are and work through NADeF to achieve them,” Opoku Darko was further quoted as saying in the release.

In 2014, NADeFwas awarded the best social impact investment vehicle in Africa by the European Union’s African Chamber of Commerce at the EU-Africa Chamber of Commerce’s first annual Corporate Social Responsibility (CSR), in Africa awards ceremony in Brussels, Belgium, it noted.