FES, TUC launch guide for migrants and returnees in Ghana 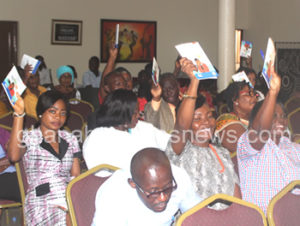 There are ongoing debates around the world against the term illegal migration as proponents argue that no human being is illegal. However, lack of information for potential migrants could put them in an undocumented or illegal migrant status as some prefer to call it.

The issue of illegal migration has dominated and still leads international discourses as migration is not events that happen once but a process that has been with us and will forever remain with us.

Many migrant workers embarking abroad for employment do not only have unrealistic expectations and  inadequate information about employment, living conditions abroad, recruitment procedures, worker’s rights, but lack up-to-date information and face many costs on return and reintegration, according to the Friedrich Ebert Foundation (FES).

The lack of information has placed many migrant workers in vulnerable and risky economic and social situation. As a result, the FES in collaboration with the Trades Union Congress (TUC), has launched a publication titled; “Pre-decision and Information Guide for Potential Migrants and Returned Migrant Workers in Ghana.”

The document launched April 11, 2017 is specifically intended to provide aspiring migrant workers information on required documentation before they travel, recruitment procedures, worker’s rights and the right to join a trade union.

Commenting on the document, Dr.Mary Boatemaa Setrana, a Lecturer at the Centre for Migration Studies, University of Ghana noted that people refuse to seek for information and guidelines on migration from government entities because they do not trust these institutions.

“People are likely to migrate when they struggle so I would entreat government to make development its priority. We need to improve our sectors and citizens should be able to access basic needs because people are moving for one thing – well paying jobs.” She added.

Dr Setrana pointed out that the book came at the right time as information on returning as a migrant worker is lacking in most African countries and migrants who return to invest lose all their money because they did not receive the right information to make informed choices.

“Migration among Africans far outweighs migration outside Africa and it may be as a result of the crisis in Europe. Africans are migrating to the Gulf states instead of Europe,” he said.

He noted that migration trends are taking a different form as the number of women migrants are increasing. Statistics says women make up 48 per cent of migrants around the world, he said.

Copyright ©2017 by Creative Imaginations Publicity
All rights reserved. This news item, or any portion thereof may not be reproduced or used in any manner whatsoever without the express written permission of the publisher except for the use of brief quotations in reviews.