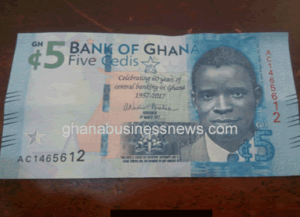 Ms Catherine Ashiley, a former Director, Currency Management Department of the Bank of Ghana (BoG), has described the commemorative five Ghana cedi banknote as the “most modern” banknote in the world.

She said the note, issued to celebrate the Bank’s 60th anniversary with new security features of international standard, continued to receive commendations across the globe and urged the citizenry to keep it clean to market the country.

Ms Ashiley was addressing the media and representatives of banking institutions in the Volta Region at Hohoe on the need to introduce the commemorative GH¢5.00 banknote.

She said the issuance of commemorative banknotes was an international practice and that the country did not do anything out of the ordinary.

Ms Ashiley said the notes were a one-off prints and that they would not be reprinted, thus, a “collective item,” which individuals could preserve and sell in future for some fortune.

Mr Dominic Owusu, Chief Engineer, BoG, who took the participants through public security recognition features of the note, said the tactile mark, which helps the blind to identify the note and the QR Code were very important information features attracting international attention.

He said banknotes were business cards for countries and advised the citizenry to use the notes well.

The new smaller size notes have hosts of modern security and information features.