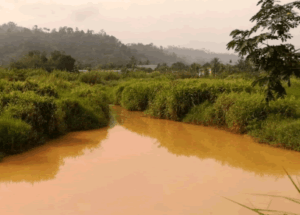 The Christian Council of Ghana (CCG) has urged President Nana Addo Dankwa Akufo-Addo to strive to make the Birim River and other polluted water bodies in the country drinkable again.

Reverend Dr Kwabena Opuni-Frimpong, the General Secretary of CCG, said the President should, as a matter of urgency, institute immediate measures to curtail illegal mining, also known as galamsey, the main cause of water pollution in the country.

He said galamsey activities had degraded vast portions of the country’s lands and rendered almost all the major water bodies undrinkable due to the deadly chemicals they used such as cyanide and mercury.

In a sermon at the Salvation Congregation of the Presbyterian Church of Ghana in Accra, Rev. Opuni-Frimpong expressed regret of allegations that some traditional leaders and high profile personalities were behind the illegal mining.

He said such personalities had the responsibility of holding the nation in trust for the future generation, but they had fronted and participated in illegal mining activities which had destroyed the very land they had sworn to protect.

Rev. Dr Opuni-Frimpong recalled the days when the Birim River was so pure and clean and natives could drink directly from it without treatment.

Other rivers like the Tano, Pra, and Ankobra were also tourist attractions and the pride of the country.

“Today, however, they have become rivers of dark brown water harbouring dangerous chemicals. Communities along the banks have been deprived of water for farming and domestic use,” he said.

Rev. Dr. Opuni-Frimpong said illegal mining had also destroyed vast amounts of cocoa lands and robbed farmers of their livelihoods adding that it had threatened as well as derailed the country’s target of increasing production of the cash crop to earn more foreign exchange.

He said even the church risked having to import water for baptism, if the situation continued and, therefore, appealed to President Akufo-Addo to gather the political will to fight the menace and restore the polluted water bodies and degraded lands.

“This will be one of the legacies you can bequeath to the nation,” he said.

Rev. Dr Opuni-Frimpong pledged the Council’s commitment to the Media Campaign against Illegal Mining and called on all religious institutions to join the course.

Ghana is currently grappling with the devastating effects of illegal mining on farmlands and in water bodies. The use of carcinogenic poisons such as mercury and cyanide had rendered the waters unusable for communities along the banks that relied on those rivers for fresh water.

The Ghana Water Company had said it was becoming increasingly difficult to treat water from those polluted sources for public consumption.

Some experts have also warned that the rampant pollution could result in Ghana having to import water from neighbouring countries in the near future if the situation was not curtailed.