Home / General News / Despite deporting more than 4500 Chinese, they still contribute to $2.3b illegal gold mining loss to Ghana

Despite deporting more than 4500 Chinese, they still contribute to $2.3b illegal gold mining loss to Ghana

April 11, 2017 General News, Lead Comments Off on Despite deporting more than 4500 Chinese, they still contribute to $2.3b illegal gold mining loss to Ghana

Illegal mining or galamsey isn’t new in Ghana. The word is a corruption of the English “Gather and sell,” which used to be the preserve of mostly Ghanaians in mining communities. But the invasion of Chinese citizens in the sector has exacerbated the situation, which contributes to the loss of $2.3 billion to Ghana.

The Minister of Lands and Natural Resources recently said, it is estimated that $2.3 billion worth of illegally-mined gold left Ghana in 2016. Meanwhile Ghana earned $3.2 billion from official gold exports in 2015.

“Because illegal mining is unregulated, it is difficult to determine how much it generates, particularly from illegal Chinese miners.

Minister John Peter Amewu recently estimated stated that $2.3 billion of illegally-mined gold left Ghana in 2016, which is a significant amount considering that approximately $3.2 billion of gold was officially exported from Ghana in 2015. This would suggest that illicit small-scale mining (galamsey) represents more than 70 percent of all gold production in Ghana. Even if, for example, illegal Chinese miners were responsible for only 10 percent of the illegal mining in Ghana, that would still be worth $230 million,” Channing May of the Global Financial Integrity (GFI) told ghanabusinessnews.com by email.

A new analysis by the GFI on transnational crimes notes that while it is illegal for foreigners to engage in small-scale mining in Ghana, Chinese migrants have been largely undeterred due to rising gold prices.

The report points out rising allegations that Chinese miners, sometimes armed, have destroyed farmlands and polluted water sources in order to look for gold, regularly leading to clashes between them and the local population.

The report citing local news sources indicates that recently, the Ghanaian government deported more than 30 illegal miners, the majority of whom were Chinese, in August 2016.

In 2014, more than 1,577 illegal foreign miners were arrested by the Ghanaian authorities, and more than 3,800 submitted to deportation voluntarily, according to the Ministry for Lands and Mines. Immigration authorities said that in June and July 2014 alone 4,592 Chinese illegal immigrants were deported from Ghana.

“Ghana relies on China for billions of dollars in loans and trade, and the crackdown on illegal foreign miners has created a difficult situation for Ghana,” the report points out.

The report citing the increase in anti-Chinese sentiment in Ghana, adds, that, it is mirrored throughout much of Africa, due in large part to conflict between locals and Chinese migrants.

“Natural resource extraction is a common flashpoint, but any sector or activity that puts migrants and locals into competition is sensitive. Resentment is commonly evident when locals are not employed in foreign-financed projects or when they feel the operations of foreign companies are plunderous rather than mutually advantageous,” it says.

According the GFI, illegal mining is a valuable transnational crime, estimated to be worth $12 billion to $48 billion annually. 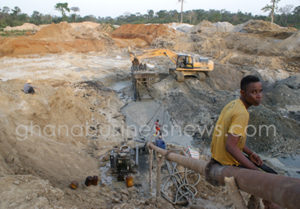 “To better combat the trade in conflict minerals, the discussion must be broadened to include the illegal mining of any mineral that generates conflict, regardless of type, location, or circumstances. Illegal miners typically receive a fraction of the value of the minerals they extract but accrue the greatest amount of risk. For OCGs, terrorist organizations, and paramilitary groups, illegal mining provides a high profit, low risk financing source as well as an opportunity to launder dirty money from other activities,” GFI indicated.

While pointing out the well-known truth about mineral resources, which is that they have the ability to greatly contribute to a country’s domestic resource mobilization and development, GFI notes that  illegal mining undermines these opportunities.

“Illegal mining has serious, long-lasting repercussions on the environment, human security, and economic development that must be combatted in order to benefit both nations and their citizens,” GFI stated.

Meanwhile, the Chinese authorities have written to the Ghanaian authorities expressing concerns about media campaigns against illegal Chinese miners in the country and issuing subtle threats to the country. Below are the talking points contained in the document unedited.

Recently, the Ghanaian media has started a mass education campaign against the illegal mining activities. This is generally conducive to the Ghanaian government’s efforts to address the illegal mining issue. However, there are a number of distorted or biased reports and stories on Chinese people, especially some reports and cartoons that are defaming Chinese leaders and senior officials. The Chinese side is very concerned about this unhealthy tendency. We hope that the Ghanaian government will pay due attention to this situation, take necessary action to stop such things from happening again and guide the media to give an objective coverage on the illegal mining issue so as to create a good environment for further development of our bilateral exchanges and cooperation.

As we all know, the illegal mining issue is very complicated. The reasons behind are not only related to the governance, regulation, law enactment and enforcement in the mining sector, but also involve various interest groups or stakeholders. To address the illegal mining issue, both sides should abide by the principles of “conducting source control, taking holistic countermeasures, addressing both symptoms and root causes.” Any simple, radical, forcible measures will not yield the expected results. This has been proven repeatedly by what has happened in the past. Otherwise, it will damage our mutual political trust and harm bilateral relations.

H. E. Chinese Ambassador Sun Baohong, in her various meetings with officials of the new NPP administration including H. E. President Nana Akufo-Addo, H. E. Vice President Dr. Bawumia, Hon. Mr. John Peter Amewu, has reiterated China’s position on the illegal mining issue. And the two sides have reached consensus that the fight against illegal mining activities should not resort to mass arrest, media hype and illegal measures, and should never do harm to the bilateral relations.

It is therefore, some unbridled reports by local media, as I mentioned, are deviation from the spirit of collaboration and do not bode well for the development of China-Ghana relations. We sincerely hope that the Ghanaian government shall take responsibility of guiding the media and requesting them not to publicize such defamatory reports or stories against Chinese leaders, officials and Chinese government. This will help create a sound environment for our joint efforts to address this issue and continuous development of our bilateral relations.