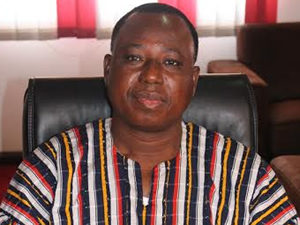 Mr Joseph Akanjolenur Whittal, was appointed as the Commissioner of the Commission on Human Rights and Administrative Justice (CHRAJ) by the President in accordance to the 1992 Constitution.

Information made available to the Ghana News Agency indicates that from 2012 until the appointment as Commissioner, Mr Whittal served as CHRAJ Deputy Commissioner.

The New CHRAJ Commissioner from 2012 to date was appointed member of the Steering Committee on the Open Government Initiative (OGPI); and from 2008 to 2012 he was a Director Legal and Investigations at Commission’s Head Office, Accra.

From 1994 to 2008: appointed CHRAJ Regional Director in charge of the Upper East Region; 1992 to 1994: appointed State Attorney at the Ministry of Justice and Attorney – General’s Department and 1991 to 1992: Member/Legal Officer, Office of the Revenue Commissioners.

Mr Whittal did his national service with the Legal Aid Board where he served as a Legal Officer from 1990 to 1991 at the Zonal Office at Tamale for the Upper East, Upper West and Northern Regions.

The rest are: Faculty of Law, University of Ghana, Ghana Certificate in Alternative Dispute Resolution (ADR); and Banjul, The Gambia, Certificate in the use of International Human Rights Procedures.

Among International Courses and Training Programmes Mr Whittal had participated in between 1998 and 2005: Banjul, The Gambia, the 24th session of the African Commission on Human and Peoples Rights – with the status of an observer.

Mr Whittal had also served as a NANHRI staff on diverse human rights thematic issues including:  The African architecture for the promotion and protection of human rights; Civil and Political rights; Economic, Social and Cultural rights; women and children rights.

The rights of the Aged: HIV and Aids; Sexual orientation and gender identity and education.

Member of Steering Committee of NANHRI – became a member of NANHRI in 2014 and responsible for managing the operations of the NANHRI through a Secretariat based in Nairobi, Kenya.

On International Leadership Roles from 2014 to date Mr Whittal was elected as a Working Group (WG) member of the International Coordination Committee (ICC) of National Institutions for the promotion and protection of human rights on the Sustainable Development Goals (SDGs).

Brussels, Special Event of the European Commission with National Human Rights Institutions on the occasion of European Development Days – Brussels – 2015.

Mr Whittal has also contributed as a resource person, consultant, facilitator, panelist or expert in events hosted by, among others to Inter-governmental bodies, National Human Rights Institutions, Governments, Judiciaries and Universities.

Fused or Un-fused: Weighing the advantages and challenges of the triple institutional mandate of the CHRAJ of Ghana – Paper delivered at a Colloquium of African Ombudsman and Mediators Association (AOMA) in Kenya, 2013.

“Ghana’s Democratisation Process so far: The African Charter on Democracy, Elections and Governance (ACDEG) in focus” – presented at a Roundtable Discussion organised by IDEG and published in Ghana Speaks Lecture Series.

The role of National Human Rights Institutions in the protection of economic social and cultural rights (ESCRs) – the case of Ghana presented at a panel discussion organized by the European Commission on the occasion of European Development Days (EDD), 2014.

Malta, “Child Early Forced Marriage- Taking forward the Kigali Declaration on CEFM- A case study of Ghana” – Presentation made at the parallel event of the first “Women’s Forum” at the Commonwealth Heads of State and Government Meeting (CHOGM) 2015.

“Freedom of expression, association, peaceful assembly and the narrowing of civil society space” – Presentation made at the Commonwealth Forum of National Human Rights Institutions (CFNHRIs) parallel event at CHOGM, 2015