Career dilemma for the developmentally challenged in Africa 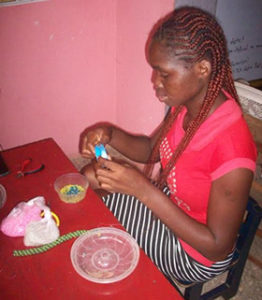 Kuni (not real name) has been diagnosed with Down syndrome. She is a 12-year-old girl going on thirteen. She can communicate, do some of her lessons unaided and is quite adapt at achieving most of her self-care objectives.

On some occasions, while she goes about her daily routine under the close watch of her class teacher, her mother endeavors to take time off from work to monitor her activities at her school.  Her eyes would often follow her adolescent daughter with something akin to apprehension etched upon her features.  It is a fear not for the present but for the future as this much has been revealed by Kuni’s mum in feed-back sessions with a therapist cum school facilitator who worked in the past under the tutelage of Dr. Helen Nwanze, one of the foremost speech pathologists in Africa.

“I do not know what the future holds,” she would sometimes confess. She is not alone, as parents of the thousands of other developmentally challenged children living in West Africa (data on the number in West Africa is presently inconclusive) wonder what will happen to their offspring when they are no longer available to look after them.

Such concerns and others have led to the Annual Autism week organized by GT Bank with the first edition holding in 2011. During the 2016 edition, the Managing Director/Chief Executive Officer of GT Bank, Segun Agbaje in the opening address while expressing his delight about some of the milestones achieved, expressed his uncertainty concerning the future welfare of developmentally challenged children specifically by the time they become adults.

At the event, the MD revealed that since not much has been done in the past as regards looking after children with autism in sub-Saharan Africa, the annual autism workshop was created to address the myriad of challenges faced by individuals with special needs. Parents who attended the 2016 forum expressed their appreciation. They see the yearly event which remains the biggest gathering in West Africa for all stakeholders as a welcome initiative (more info can be sourced on www.csr/gtbank.com/autism).

Even though the Lagos State Government of Nigeria organizes a yearly disabilities fair, many feel that the public sector seems to be slowly catching up because the fair is not exclusive to developmentally challenged individuals as issues affecting the physically challenged are also included.

In other climes, it is not just about organizing talk-shops as issues related to career options for the developmentally challenged have been given priority. Such individuals are given the opportunity to work in places like departmental stores, libraries, schools etc. Instead of being pitied or ostracized as is the case in Africa, they are encouraged to have a form of independence and not to be 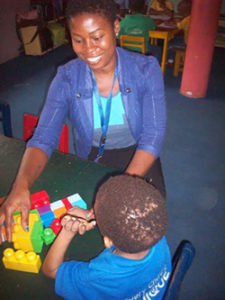 limited by their challenges.  For example, David De Sanctis who has been diagnosed with Down Syndrome has also taken a lead role in the movie ‘Where hope grows’.

In the United Kingdom things are not much different.  Alex Odiana is a young man of African origin living and working in the United Kingdom. He is a care-worker who is always on hand to help individuals who are benefiting from the assisted living arrangement. In such homes, adults with special needs are supervised to ensure that they have a certain level of care while living independent lives. It helps them optimize the challenges that they are faced with.

In sub-Saharan Africa such homes for adults are rare and even when they exist they are not funded by the government.

Adults with special needs have to fend themselves or have to be looked after by family. Festus is one such example. He lives with his elder brother in Benin. He picks discarded bottles on the streets and sells to those who recycle which make some people mistake him for a lunatic. For each pick-up which is not more than once a week he gets paid a one dollar equivalent.

Eborieme Omo Olohibe is the proprietor of Salem Montessori School; a special needs school located in the oil-rich region of Nigeria. She is hoping that things would be different for the present generation of children with developmental disabilities by the time they are in their twenties. She started the school which is more than a decade old as a result of the gap she noticed in the care of children with special needs in that part of the country.

“I started as a Montessori teacher but along the line, I was approached by a desperate parent to help with her child with special needs and that’s what led me to what I do today. At that time, little was known about the condition and the ostracizing based on prevalent superstitious beliefs didn’t help matters. I was sponsored on training for months by the parent so I could work with her child,” she said.

She speaks about the past when children were hidden in basements and left to live like animals by parents for fear of being ostracized.

Dotun Akande is the founder of Patrick Speech and Language Centre, one of the foremost institutions concerned with helping people with special needs gain the skills necessary to function in the African society.

During a workshop on autism that held in Lagos June 2016, she spoke about how the desire to help her son and protect him from being stigmatized led her to set up the centre which was founded in 2006.  Today she is a champion for others that are faced with similar challenges.  The fight is far from over as many parents who are very poor cannot afford to send their children to such privately owned institutions. In Nigeria for instance, the majority live on less than two dollars a day. Others who can pay may live too far away to access day services for their children.  To address some of the afore-mentioned challenges as well as others, a blog www.behaviourmerchants.blogspot.com, which is a 100 per cent internet business support service outfit geared towards providing niche services for those who cannot afford to spend a lot of money, has as one of its specialized programme, a naturalistic focused training for parents and caregivers of children with special needs.

Such online based training programmes empower the parents to provide therapy where they cannot gain access to good therapists or when they need their wards to get specific skills on how to navigate in specific environments.

However, individuals like Oyakhilome a mother of a teenage developmentally challenged child is of the opinion that a lot more still needs to be done to reduce the stigma and superstition associated with such conditions. As a result of this desire to talk the talk as well as walk the walk, she announced in November 2016, in a programme at Salem Montessori School that she has set up a support group for parents with children with special needs in Benin-City, the proprietress of Salem, Eborieme Omo revealed that based on stigma attendance is still very low as most parents of children with special needs do not want to be openly identified.

Osatohanwen Iyamu knows first-hand, what it is to be discriminated against as she is a 28-year-old adult with developmental disability but she is single-minded in her pursuit for self-development.  ‘

“I have learned so many things like how to make beads, how to have conversations with others effectively,” she says in a chat. She is presently improving the skills she mentioned in a special needs school. Her determination not to be idle inspired the proprietor to create a special corner for her in a school meant for individuals that are decades younger than her. Even though things could be much better, she is determined to move on with her life but unfortunately people like her are few and far between among the sea of individuals who have been cowed by the challenges of being developmentally challenged in sub-Saharan Africa.

FWSC says it has no hand in CEOs’ salary