March 29, 2017 General News, Lead Comments Off on Government committed to power all facilities with solar by end of Akufo-Addo’s term – Minister

The Minister for Energy, Mr Boakye Agyarko says the government is committed to ensure that all government facilities are powered with solar by the end of Akufo-Addo’s term to save the country a tremendous amount of money.

Mr Agyarko said, “In my own ministry our 13 to 14 per cent reliance on solar means that on a monthly basis we are saving about GH¢7000, which translates to about GH¢90.000 annually or $20.000 and that is a significant savings.”

Mr Agyarko was speaking at a brief event organized by the US embassy to mark a signing deal between the US Trade and Development Agency (USTDA), and BioTherm Energy (Pty) Ltd.

He noted that, “God in his infinite wisdom gave us the sun and if we are careful and wise enough then the only source that we think is indistinguishable is what we should be fully relying on hence my passion for renewable energy.”

He however, indicated that his commitment to solar has led to a discussion where it is the objective to turn his department into a solar powered building which will gain them more authority to compel other Metropolitan, Municipal and District Assemblies (MMDAs), to go solar.

He said the objective of the Akufo Addo’s government is to keep the light on and keep transportation running.

“Our experiences through 2012 to 2014 and 2016 and its lingering effect mean that if we are to keep the lights on, then our reliance on fossil fuel is not the way for the future. We have to get renewable and get to renewable fast,” he noted.

He indicated the possibility of generating electricity much cheaper from solar than the utilities sold to Ghanaians. Adding that, it is possible to generate electricity from solar for  less than 60 pesewas or 15 cents a kilowatt hour.

Through the deal, the US Trade and Development Agency (USTDA), provided $861.300 to fund feasibility studies for the Ghanaian company BTSA Buipe Solar Ltd in the Northern Region of Ghana. 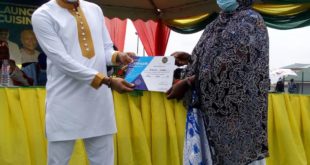