Global Activists call for an end to gender pay gap

March 15, 2017 General News Comments Off on Global Activists call for an end to gender pay gap 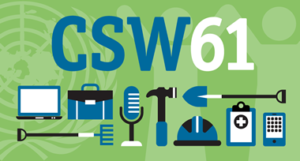 Gender Activists, UN Member States and champions of equal pay has called for an end to the global gender pay gap that stands at 23 per cent.

The advocates during the launch of the high-profile: “Equal Pay Platform of Champions,” at the on-going UN Commission on the Status of Women (CSW61) session in New York called for equal pay for work of equal value.

The event at the UN Headquarters was hosted by UN Women in partnership with International Labour Organosation (ILO), and co-sponsored by the Missions of Iceland, South Africa and Switzerland.

It coincided with the opening day of CSW61, the largest inter-governmental forum on women’s rights and gender equality, which is focusing this year on the theme: “Women’s Economic Empowerment in the Changing World of Work”.

Information available to the Ghana News Agency in Accra indicates that the Platform of Champions builds momentum to address the issue of pay inequality, which affects women and girls in every country in the world.

GNA information indicates that on global average, women only make 77 cents for every dollar men earn. “As a result, there is a lifetime of income inequality between men and women and more women are retiring into poverty”.

One of the main reasons for the gender pay gap is that women tend to be concentrated in different jobs than men, such as teaching, health care, or child-care, and these sectors are the ones that tend to be underpaid.

“In all fields, at all levels of society, and across all countries, wage inequalities between men and women are a blatant reality, which impacts the lives of many.

“How much longer are we going to allow it? By joining this Platform, I am determined to shed light on this entrenched form of discrimination and help efforts to put an end to the gender pay gap,” Patricia Arquette, Oscar-winning actress and member of the Equal Pay Platform of Champions stated.

“The gender pay gap reflects the unjustifiably diminished position of many women in society and helps to keep them there.

“It affects every country across the world and is now coming under full scrutiny,” said UN Women Executive Director, Dr Phumzile Mlambo-Ngcuka stated.

She said: “I am confident the Equal Pay Champions will help to make this flagrant inequality a thing of the past through their advocacy efforts”.

Through their advocacy work, the Equal Pay Champions will raise awareness on this critical issue, and will call on increased political support by proactively reaching out to decision and policy-makers.

“In many ways the quest for women’s economic empowerment will be lost or won in the world of work. It will be reflected in whether and how women gain entry to the labour market, and the terms of their engagement in the world of work—whether in fields or factories, service centres, households or boardrooms,” Guy Ryder, ILO Director-General said.

The Ministry of Gender, Children and Social Protection is leading a Government delegation whilst scores of civil society and non-governmental organisations and gender advocates are also participating in CSW61.