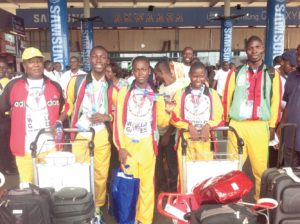 The Netherlands Embassy in Ghana, has refused to grant the Ghana Special Olympic team visas, to enable the team to participate in the 2017 Special Olympics World Winter Games in Austria.

Ghana’s 20-man contingent, scheduled to depart the shores of the country on Monday, March 13, was left in limbo.

The quadrennial competition, which is opened to children with intellectual disabilities, spans from March 14-25.

Ghana was billed to participate in the floorball competition on Monday, March 20.

According to a Board Member of the Special Olympic Ghana (SOG) Nana Wereko Ampim, the Netherlands Embassy refused them visa on the grounds that, they would not return to Ghana after the Games.

He expressed disappointment over the unfortunate incident saying “it was sad and disheartening that the Embassy would harshly deny athletes, who have been to United States for similar games, because they were intellectually disabled without  proper background checks.

“The SOG Board was comprised of reputable professionals, who have dedicated their  time for a good cause of helping the  intellectually disabled persons in our society”.

Mr. Wereko-Ampim, said the behavior of the Netherlands Embassy has forced the president of the Special Olympic Africa  and the world body to come to the rescue of the team but the Embassy maintained its position.

On his part, though the president of the Republic of Austria, His Excellency Alexander Van den Bellen has ordered the  Netherlands Embassy to Ghana to grant Team Ghana the visas, the embassy has stuck to its discriminatory position to the    intellectually challenged athletes  though the games were designed for them.

He disclosed that, the Embassy exempted Team Ghana from paying visa fees, after they submitted their traveling documents on February 2, 2017.

He mentioned that, though they faced visa challenges, his outfit will continue to nurture and develop the potentials of the athletes as a way of integrating them into society in a meaningful manner.

Mr. Wereko- Ampim therefore appealed to the government to come to their aid to enable the teams’ participation.

Ghana won four silver medals in the last World Special Olympics Summer Games in Los Angeles in 2015 after winning four silver medals in athletics and produced the second fastest woman in the world in the 200 metres when Princess Ayin of  Bator Special School in the Volta  region clocked 25 seconds.