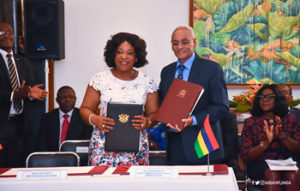 The Government has signed a Double Taxation Avoidance agreement (DTA) with Mauritius.

Both countries have also set up a Ghana-Mauritius Permanent Joint Commission on Bilateral Cooperation, as part of measures to facilitate trade between the two countries.

Ghana and Mauritius have also agreed to collaborate on an Investment promotion and protection agreement to better channel investment into each other’s country, possibly via Special Investment Zones.

The DTA is subject to ratification by Ghana’s Parliament.

The agreements were signed at Port Louis, Mauritius in the lead up to the celebration of the Indian Ocean nation’s 49th Independence anniversary, which falls on March 12, 2017.

Speaking at a joint press conference after the signing ceremony, Ghana’s Vice President, Alhaji Dr Bawumia, who is the Special Guest for the Celebrations, explained that the agreements formed part of Ghana’s quest for greater co-operation with the rest of the world, especially Africa, in order to boost trade.

“We have seen the manifestation of the first fruits of this Joint Permanent Commission with the signing of the historic double taxation agreement between Ghana and Mauritius.

“We believe that this will provide a platform to give confidence to investors both in Ghana and Mauritius to undertake investments in our respective countries and not be taxed twice by our respective governments.

“We believe this is just the beginning of our cooperation,” Vice President Bawumia indicated.

Dr Bawumia emphasised the need for greater intra-African trade to better improve the lives of Africans.
“Our government believes very strongly there has to be more trade within the African continent and among countries of the South.There has to be more investment, and more co-operation.

“We are happy to note that this type of co-operation that we seek is being manifested, especially recently in our relationship with Mauritius, in the area of trying to set up Ghana as an International Financial Services Centre in the West African Sub region,” Dr Bawumia said

Prime Minister of Mauritius, Anerood Jugnauth, announced that a number of framework agreements have also been reviewed, including the setting up of a Technology Park at Dawa in the Greater Accra Region, and investments in the energy and tourism sectors.

“We have also agreed to pursue consultations on two project proposals submitted by Mauritius, namely, the setting up of a solar energy power generation, and a tourism and hospitality project providing for the construction of a coastal resort in Ghana.”