I will ensure the draft affirmative bill is finalized – Otiko Djaba

March 11, 2017 General News Comments Off on I will ensure the draft affirmative bill is finalized – Otiko Djaba 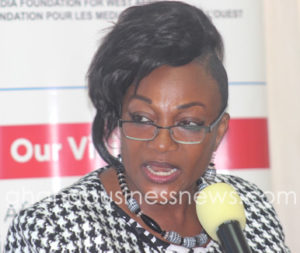 Madam Otiko Afisah Djaba, Minister of Gender, Children and Social Protection has stated that she intends to ensure that the draft affirmative action bill is finalized and brought to Parliament.

She said the draft affirmative action bill sought to promote gender equality in all spheres of national development.

According to her, the role of women in national development was not in competition with men.

Madam Djaba made the statement on the floor of Parliament on the occasion of the International Women’s Day (IWD) which is marked on March 8, each year.

The IWD which was first celebrated in 1914, has been instituted to celebrate the social, political and cultural achievements of women.

It has also been observed as a call to action towards the achievement of gender parity and the total elimination of all the obstacles impeding the attainment of gender equality and female empowerment.

The global slogan for 2017 campaign is “Be bold for Change” whilst the UN global theme for this year’s celebration focuses on “Women in the Changing World of Work: Planet 50:50 by 2030”: Step it up for Gender Equality”.

In Ghana, however, the theme has been varied to address the country’s peculiar challenges and special national aspirations.

The theme for the 2017 IWD in Ghana is “Economic empowerment of rural women: A tool for sustainable development in a changing world of work.”

Madam Djaba also used the occasion to congratulate Ghanaian women for the giant strides they have made over the years to improve their socio-economic and cultural standing.

She said in spite of the huge strides made in the upliftment of women in Ghana, many Ghanaian women still suffered from discrimination, destitution, under-representation and marginalisation.

She said though women voters constituted almost 52 percent of the electorate; they formed less than 20 percent of parliamentarians.

Madam Djaba further stated that despite the passage of the interstate succession law in 1985, there were still problems with inheritance in various communities.

“That is why one of our top priorities is the review of the Interstate Succession Act in order to make the law more responsive to the identified needs in the communities,” she added.

She said the Bill on concubinage was to ensure that widows, Common Law wives and their children were protected from hunger.

Madam Djaba also stated that the 2017 IWD must be a wake-up call to all Ghanaians to intensify the fight for the empowerment of women.

She said the government was prioritising its programmes to empower and uplift women and families through alleviating the burden of taxation on vulnerable and marginalised women like the kayayei.

Additionally, the government believes in reducing the burden of financing education of families as well as extending the school feeding programme to 1.3 million children.

Madam Djaba also announced that her Ministry would extend the Ghana Household Registry to all the regions and intensify the LEAP programme to cover many more vulnerable Ghanaians, many of whom are women.

She urged all Ghanaian women to imbibe and own the theme for this year’s global campaign for IWD, as well as challenge the biases and obstacles that confront in particular the rural women in the changing world of work.

Some of the Members of Parliament (MPs) in their contribution to the statement called for gender parity and that the government should give more opportunities to women in decision making since they form the majority of the population.