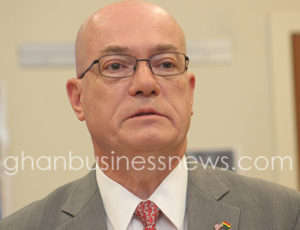 The US Ambassador to Ghana, Robert P. Jackson has launched the Ghana Integrity Initiative Consortium Corruption Survey in Accra.

The survey titled “Corruption Is Eating Us Up: A Call to Action,” according a press release copied to ghanabusinessnews.com, is a survey on citizens’ knowledge, perceptions and experiences of corruption.

The United States Agency for International Development (USAID), supported the Ghana Integrity Initiative and its local partners, SEND Ghana and the Ghana Anti-Corruption Coalition to conduct the survey through its Accountable Democratic Institution Systems Strengthening activity, which aims to increase the accountability of institutions, the release said.

It also points out that the survey polled 17,996 Ghanaians in 50 districts in all 10 regions of Ghana about their understanding, perception, and experience with corruption in various institutions and the survey found that nearly two-thirds of respondents believed that corruption was on the rise, with a majority reporting corruption in a number of institutions such as the health system, the education system, and the police.

“The United States is working with ministries, local government bodies, and others to strengthen systems to increase transparency. We applaud the commitment the government of Ghana has made to fighting corruption,” Jackson was quoted as saying.

“Ordinary citizens were the best defense against corruption. I have seen firsthand the power of committed citizens to hold those in power accountable and I believe success begets success, and as more citizens realize they can successfully prevent corruption, waste, and fraud, more and more people will refuse to tolerate it,” he added.