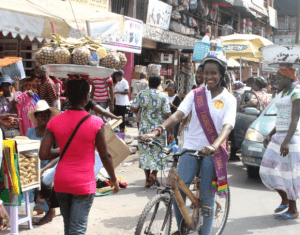 The Tema Metropolitan Assembly (TMA), has been urged to consider easing the plight of deprived women in the metropolis as a commitment to principles underpinning the International Women’s Day.

Ogyedom Nana Ama Tsetsewah I, Tema Fantehene and an Alternative Dispute Resolution (ADR) mediator said it was about time the TMA helped market women and fish mongers in the Metropolis to improve upon their livelihoods.

Ogyedom Tsetsewah told the Ghana News Agency that it was pathetic to see the deplorable conditions in which fish smokers and mongers work at Tema Newtown.

She noted that apart from sitting directly under the scorching sun at the fishing harbour to ply their trade, they also worked in unhygienic conditions including the drying of anchovies on the bare contaminated floor.

She added that market women operating from the Kwasiajaaso in Tema Community One also had no sheds or platforms to display their wares forcing them to sell fruits and vegetables on the ground while sitting by the roadside with their babies stripped at their back and inhaling contaminated air emanating from vehicles and nearby refuse heaps.

Ogyedom Tsetsewah, who is also the Mankrado of Gomoa Oguan and the Osumpahene of Gomoa Akyempim Traditional Council, also bemoaned the discounting of rural women’s status to child bearers and cooks.

According to her, due to the value the rural dweller placed on women having children, it had led to the increase in the incidence of teenage pregnancy, as the girls always aspire to have children early to attain a woman’s status in their localities.

She indicated that in order for women to get help on their farms and at home, they resorted to giving birth to many children with the hope that they would grow into a labour force to ease their burdens.

The Chief wondered why women will go to the farm with men, return home to cook and fetch bathing and drinking water for the husband and the household while her spouse sat and chatted away.

She further said currently the practice of men sharing and wearing boots to the farm while their female counterparts either go barefooted or in slippers still existed a practice which she described as unfair and discriminating.

Ogyedom Tsetsewah encouraged women in leadership positions to open their doors to under privileged women, educate and mentor them on how to make it in life and provide the needed physical and psychological support to spur them on.

The ADR Mediator also asked women not to only strive to be seen but also endeavour to discharge their responsibilities at work and home diligently as well as help their husbands to provide the needed education and nurturing for their children.

It first emerged from the activities of labour movements at the turn of the twentieth century in North America and across Europe. The day is therefore used to recognize women for their achievements.