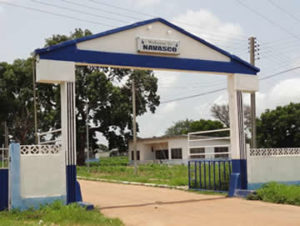 The over 2000 students of the Navrongo Senior High School in the Upper East Region, are compelled to take their meals on shift basis due to the lack of a dining hall.

The dining hall which was built since the establishment of the school in the 1960s has not been expanded to meet the growing number of students. The structure also looks dilapidated.

This compelled the school’s authority, to re-programme the students to take their meals on shift basis, therefore affecting teaching and learning.

This was made known when the old students Association of the School, popularly called “Nabia”, handed over the toilet, bathhouse and the Assembly Hall facilities it had renovated and constructed for the School at a ceremony held on the campus in Navrongo.

Whilst lauding the Students’ Association for coming to the aid of the school, the headmistress, Mrs Francisca Yizura, appealed to the Government and other development partners to support the school by expanding and restructuring the dining hall infrastructure to help address the challenge of the growing population of the school.

She said but for the support of the Association, the students would have been continuing to engage in open defecation and bathing in the open.

The Headmistress mentioned the lack of staff and student accommodation as well as the lack of a fence wall for the school as some of the major challenges confronting teaching and learning.

She commended the leadership of the Association for organizing to ensure that they raised money promptly to support one student who had been selected to attend a programme in the United Kingdom.

The National President of the old students’ Association, Alhaji Mohammed Haroon, said the Association decided to support the school with the facilities in response to the demand made by the headmistress.

The President, who is also the Regional Director of Education in charge of the Northern Region, said the School had been neglected for far too long by successive governments and appealed to the present Government to support it with infrastructure.

He challenged the students to follow the footsteps of the past students of the School who had excelled academically and were doing well in life, by taking their studies serious.

Alhaji Haroon also appealed to all past students of the School who had not yet joined the Association to do so to help contribute to the growth of the School and commended those who had over the years been contributing to the development of the School.

“Old Navascans are noted for their giving spirit and unity for development. I will therefore want to urge you all never to relent in your efforts at contributing your quota to the welfare of the School,” he said.

The National President was accompanied by the Upper East and the Navrongo Chapters to perform the handing over ceremony of the projects.