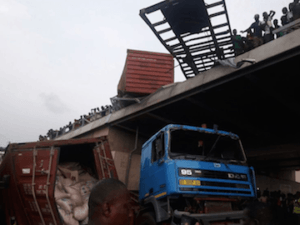 A DAF trailer with registration number GT 5557-U carrying two 20-footer containers loaded with bags suspected to be fertilizers or sugar lost control of the steering wheel causing the containers to fall off at the Kwame Nkrumah Interchange.

Mr Kamil Amadu who witnessed the accident said although no causality was recorded, none of the drivers involved in the accident was around to comment.

According to him, the occupants of the two vehicles managed to escape unhurt before the container fell on the vehicles.

Meanwhile, Mr Amadu said one of the containers was dangerously hanging on the fringes of the interchange while personnel from the Ghana National Fire Service, the Ghana Ambulance Service, the Traffic Management Team and the police were at the scene to manage the situation.

He said the accident, which happened around 1730hours on Wednesday, attracted large crowd to the scene.

Mr Amadu said he tried to solicit more information from the Police about the accident but the Police indicated that it had not finished investigations.