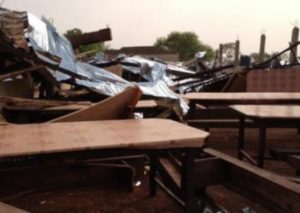 A storm amidst a heavy downpour has severely injured 11 students during an athletics competition held at Akim Asene Methodist School Park in the Eastern Region.

The students who were running from the rains to take cover in the classrooms were crashed by flying roofing sheets and had serious injuries to their backs, waist, arms and legs.

They were rushed to the Jubilee Hospital at Akim Oda where seven were treated and discharged whilst four who were in critical condition were admitted.The four are however responding to treatment.

The competition which drew students from 12 schools at Asene and Manso for a three-day activity has since been cancelled.

Mr Daniel Kwaku Gyasi, the Assemblyman for Asene Ewisa East Electoral Area, told the Ghana News Agency that the incident occurred when the rain started around 1600 hours on Thursday.

Mr Kwame Aboagye, the Member of Parliament for Asene-Akroso-Manso, later visited the scene with the chief of the town and the officials of the National Disaster Management Organisation of Birim Central Municipality.

Mr Aboagye pledged to pay the hospital bills of the victims.

It was suggested that the classroom blocks with the ripped roofs should be demolished to avoid any unexpected tragedy.

Some houses in the area were also affected by the rainstorm.