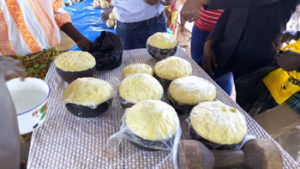 Four thousand one hundred and ninety four extreme poor persons in the Upper East Region have so far been supported by the Japan Social Development Fund Project (JSDF) to set up their own micro enterprises.

Majority of the beneficiaries  who are  women and are  drawn from the Bawku West , Talensi, Kassena-Nankana West, Garu –Tempane, Builsa North, South and the Nabdam Districts were trained in the areas of  entrepreneurial skills, business advisory services among others in addition to receiving small grants to set up their micro enterprises .

This was made known during  the Annual Stakeholder Review forum of the Japan Social Development Fund Pilot Project dubbed “Support  for  Rural  Income Generation to Targetted  Poor  Persons  in  the  Upper  East  Region”, being implemented by the Ghana Social Opportunities Project(GSOP) .

Speaking to the GNA in an interview, majority of the beneficiaries indicated that through the support they received, they had been able to establish their income generation activities which had contributed to the improvement of their livelihoods.

Madam Amina Ayela, one of the beneficiaries in the Bongo District, who is a widow with eleven children, said she was enrolled onto the JSDF programme in 2016 and trained in Shea butter processing and subsequently provided with a small grant to commence her trade in shea-butter processing.

“Out of the profit I make from my Shea butter business, I am able to cultivate groundnuts on an acre of land. I am also able to pay the school fees of my younger children and have enrolled all my household members including my children onto the National health Insurance scheme,” Madam Ayela said.

Ms Viola Naawiete Dasoberi, the Rural Enterprise Officer of the project, said the project had empowered majority of the women to set up their own micro enterprises.

She said apart from the provision of vocational and skills training, issuance of grants and provision of market linkages, the Project had also offered the beneficiaries general business management skills. “Follow up business advisory and mentorship support services are also being provided by the Project through selected Service Providers to beneficiaries in all the eight districts,” she added.

The Regional Coordinator of GSOP, Mrs Adwoa Asotia-Boakye, said the JSDF project was targeted at the Labour-Intensive Public Works (LIPW) and Livelihood Empowerment Against Poverty (LEAP)communities within eight  districts in the  Region.

She explained that a lot of successes had been chalked so far with less than two per cent of the beneficiaries defaulting in the application of the grant funds and expressed optimism that beneficiaries would be able to maintain their current momentum of work to sustain the gains made.   Mr Desmond Duametu, the National Capacity Building Specialist of GSOP, explained that the JSDF which is a pilot project is a social protection intervention initiative, supported by the Japanese Government and World Bank and the Ministry of Local Government and Rural Development.

The pilot project is in accordance with the Ghana Government’s vision for social protection which is focused on promoting the well-being of Ghanaians through an integrated platform for effective social assistance, social and productive inclusion, social insurance and financial access to social services, so as to mitigate and reduce vulnerabilities, close the inequality gap and ensure total inclusion of all Ghanaians.