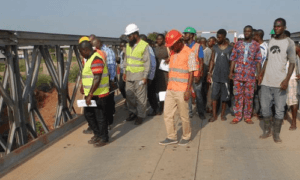 Maintenance works have begun on the Buipe Bridge, which crosses the Black Volta in the Central Gonja District of the Northern Region to keep it in good shape for use by motorists.

The works, being carried out within a 20-day period; February 17, to March 8, by the Bridge Maintenance Unit of the Ministry of Roads and Highways, involves repairing metal joints and broken slaps to make the bridge strong.

The Buipe Bride, constructed to last for 50 years, is now in its 54th year, and it has suffered a lot of distress resulting in weak metal joints and broken slaps requiring emergency maintenance.

As a result of the emergency maintenance works, the bridge is closed to vehicular traffic and the travelling public from 2pm to 6am the following day.

Only vehicles weighing up to 20 tons will be allowed to cross the bridge from 6am to 2pm, each day.

Mr Kwasi Amoako-Atta, Minister of Roads and Highways, who inspected the ongoing emergency maintenance works on the bridge at Buipe on Friday, appealed to motorists to cooperate with the Ministry and use the alternative routes for work to be completed on the bridge.

Mr Amoako-Atta said the long-term solution was to replace both Buipe and Yapei Bridges, adding that efforts would be made to secure funding to do so.

He said the Ministry would do a holistic overview of all bridges in the country to keep them in good shape.

The Buipe Bridge facilitates movement of goods and people to and from the northern parts of the country, and it is also located on the international transit corridor, which serves the country and her landlocked neighbours.