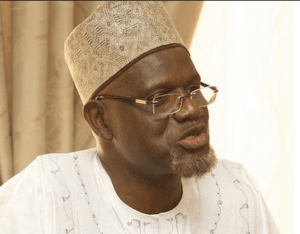 The head of the Ahmadiyya Muslim Mission, Maulvi Mohammed Bin Salih, has stated that Ghanaians had finally found the leader they longed for when Nana Addo Dankwa Akufo-Addo was elected as President of the Republic last December.

According to the Muslim cleric, the determination and resilience exhibited by President Akufo-Addo, resulting in his victory after a third try, coupled with the overwhelming margin of victory secured in the elections, pointed to the level of confidence Ghanaians had reposed in him as the leader who would bring progress and prosperity to the nation.

Maulvi Bin Salih stated this when he led a delegation of the National Executive Council of the Ahmadiyya Muslim Mission to the Presidency to thank President Akufo-Addo for gracing the 85th anniversary celebration of the Mission, on January 12, 2017.

He noted that Ghana’s major “shortcoming” over the years had been the leadership, explaining that the hardworking, industrious people of Ghana “do not deserve the situation we find ourselves in.”

Maulvi Bin Salih noted that the result of the December 7 election “proved that Ghana was mature and is ready to take back its place in the comity of nations.

He was confident that Ghana, under the leadership of President Akufo-Addo, would thrive, indicating that “I am not prophesying, I don’t prophesize. I am only talking out of my convictions.”

Touting the selflessness of the President, Maulvi Bin Salih noted that barely five days after taking office, “and even though we (Ahmadiyya Muslim Mission) hadn’t come to congratulate you (President Akufo-Addo) on your victory, you did not hesitate to honour our invitation. The President assured me that he will attend the event, stating that ‘I will not disappoint you’, and true to his word, he did not disappoint.”

Maulvi Bin Salih extended an invitation to President Akufo-Addo to the Annual Worldwide Convention of the Ahmadiyya Muslim Mission, which would take place from July 28-30, 2017, in London, adding that “you will become the very first President ever to attend this event, should the President decide to honour the invitation.”

President Akufo-Addo, on his part, said he was grateful for the words of commendation from Maulvi Bin Salih, and applauded the contribution of the Ahmadiyya Muslim Mission towards the development of country, in the fields of education, healthcare and the provision of social services.

President Akufo-Addo noted that in addition to the constitutional provisions which demanded religious tolerance and harmony amongst the populace, he told Maulvi Bin Salih he had a deep, personal attachment to the Ahmadiyya Muslim Mission.

“Your predecessor, the late Maulvi Wahab Adam was one of my principal counselors, a deeply religious person and a man of integrity. As Attorney General, I had the privilege of recommending him to President Kufuor for appointment as a member of the National Reconciliation Commission, which was set up to heal the wounds of the nation after decades of military rule. He excelled in the work of the Commission and was one of its driving forces,” he added.

The President also paid tribute to the late Alhassan Bin Salih, elder brother of Maulvi Bin Salih, stating that “he was one of the great figures of our party. He was a man of unbending integrity, and made sure that we always did the right thing.”

President Akufo-Addo appealed to the Ahmadiyya Muslim Mission to “pray for me and for those who work with me, so we are inspired by the Almighty to do a good job for Ghana. Pray to God to give me wisdom, courage and make me a compassionate leader.”

“I want to be an honest leader, a good leader and one who will be remembered as having contributed significantly to the progress and welfare of Ghana.”