Home / General News / Own a toilet at half price, Accra residents urged

Own a toilet at half price, Accra residents urged

February 5, 2017 General News Comments Off on Own a toilet at half price, Accra residents urged 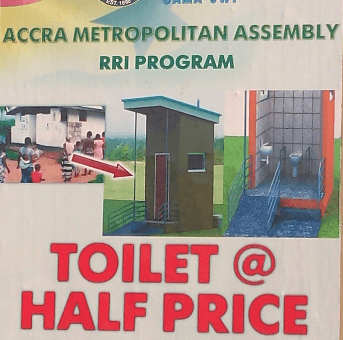 Mr George Asiedu, a Consultant at the Ministry of Local Government and Rural Development (MLGRD), has called on the citizenry to take advantage of the “Own a household toilet at half price” programme, to curb open defecation.

He said available statistics indicated that only 15 per cent of the people living in the Accra Metropolis had access to improved toilet facilities, which contributed to unhealthy practices such as indiscriminate defecation.

Mr Asiedu, also an Engineer of the Greater Accra Metropolitan Area – Sanitation and Water Project (GAMA-SWP) made the call in an interview with the Ghana News Agency,  during a sensitisation campaign on the promotion of hygiene at Nima in Accra, to curb the spread of diseases.

The campaign is being sponsored by the World Bank and the MLGRD.
Mr Asiedu said the overall objective of GAMA-SWP was to improve sanitation and water supply with the emphasis on low income urban communities, such as Glefe, Chorkor, Gbegbeyise, Sabon Zongo, Mamponse and Nima communities in Accra.

He said the project was to strengthen management of environmental sanitation in the 11 Metropolitan, Municipal and District Assemblies in the Greater Accra Region.

He said the project would end by 2018 hence the need to embark on vigorous public education to ensure that residents got new sustainable and affordable toilets at half the price within the cholera pandemic communities in the Region.

He acknowledged the contributions of the National Disaster Management Organisation, the National Service personnel and the Environmental Health Officers of the Accra Metropolitan Assembly (AMA) for their support to the project to enhance sanitation and environmental hygiene.

Mr Asiedu gave the assurance that the laws would be strictly enforced if the project came to an end, leading to the prosecution of  offenders who had refused to construct toilets in their homes.

Mr Robert Sarbah, the Coordinator of the project said the exercise, was in the best interest of the households and urged them to take advantage to avoid being arrested and prosecuted.

He called on residents who would benefit from the project to support the AMA in its efforts to ensure sound sanitary practices in the metropolis.

He said the AMA would strictly enforce its environmental bye-laws after completing the project.