AFCON 2017: Black Stars’ bonuses yet to be decided – Sports Ministry

January 19, 2017 Sports Comments Off on AFCON 2017: Black Stars’ bonuses yet to be decided – Sports Ministry 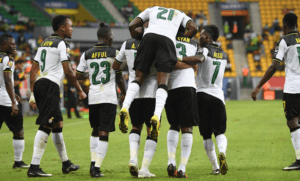 The Ministry of Youth and Sports (MoYS) debunk speculations about figures reported to be agreed bonuses of the Black Stars, saying they are false and must be disregarded.

In a release copied to GNA, MoYS said its attention has been drawn to certain figures making rounds and being the subject of discussions in the media as the winning bonuses of the senior National Football team, the Black Stars at the Africa Cup of Nations (AFCON), currently taking place in Gabon.

According to the release “The said bonus structure purported to have been tabled by Government and the Ministry were false and it wishes to state in no uncertain terms that no such decision has been taken by the Government”.

“However, it must be stated that the Ministry together with the Minister-designate (representing the President H.E. Nana Addo Dankwa Akuffo-Addo) is currently consulting all key stakeholders of the game to ensure that the ultimate decision would be in the best interest of Ghanaians.

“We would therefore entreat the public to view the purported figures being speculated around as the bonuses of the stars at AFCON 2017 as false and treat it with all the contempt it deserves”.

The release which was signed by the head of public relations at the sports ministry, Elvis Adjei-Baah, however noted that “It is heartwarming to note that our gallant Black Stars are rather focused on meeting the expectations of H. E. President Nana Addo Dankwa Akuffo- Addo and the good people of Ghana by winning the cup after a 35-year wait.

There has been speculation over the bonuses of Black Stars in recent times. With $8,000 and $10,000 being tossed around as the figure.