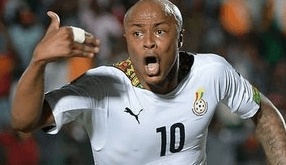 The Black Stars of Ghana, picked up the three maximum points in their first game in Group D, after a hard fought lone goal victory over old foes the Cranes of Uganda.

With history at the back of the minds of the two teams, Uganda the 1978 losing finalists to Ghana, were the more threatening side at the beginning of the game and made some incursions, which could have given them the lead.

It was however not good enough to give them the lead, as the Stars took over in the 10th minute dominated proceedings till the first half was over.

It was a fair outcome after 45 minutes, because Jordan Ayew, Asamoah and Christian Atsu could have put the game beyond the Ugandans even by the close of the first 30 minutes.

Gyan’s header was the clearest opportunity, but he headed feebly from Atsu’s cross, whilst Andre Ayew’s stylish curler was easy for Dennis Onyango to deal with in the 28th minute.

Atsu, could have made amends himself, but again shot into the hands of Onyango, but the Ghana captain manage to secure a penalty for his side in the 30th minute.

Gyan, raced on Isaac Inside, which made the defender lose the ball to Gyan and had no option than to pull him down in the vital area in the 30th minute for Bostwana referee Joshua Bondo to point to the spot kick.

Ayew, was on hand to convert without stress to hand Ghana the lead in the 31st minute, which was enough to end the half and the game eventually.

But it was not without a fight from the Ugandans, as two late minutes efforts from of Faruku Miya missed target narrowly, as well as that of skipper Geofrey Massa in the first half.

The Stars returned to the second half, with a different approach, which allowed them to play on the break. However it kept them on edge throughout the second half.

The Ugandans pushed pushed them to own half in search of the equalizer.

Ghana occasionally made attempts at breaking through, but Jordan Ayew who leads the attack seem to lack the bite to complete the task.

Coach Avram Grants efforts to protect the lone goal, pulled out Gyan for Agyemang Badu in the 71 minute obviously to increase the strength of the midfield and quell the threats of the Ugandans.

The introduction of Afriyie Acquah for Jordan Ayew made the coach’s approach to the game much obvious. He was however compelled to pull out Baba Rahman for Frank Acheampong who got injured in the first half.

Atsu could have made it two when he latched on a ball in defence, had only Onyango to beat but he saved it to deny Atsu the second goal for Ghana.