January 17, 2017 General News Comments Off on Hundreds mourn the Asantehemaa 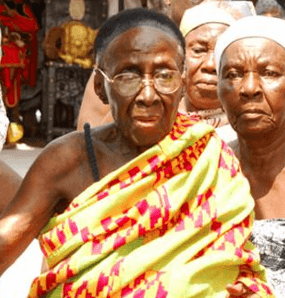 The deceased was the biological mother of the reigning Asantehene, Otumfuo Osei Tutu II.

Installed in 1977 as the 13th Asante Queen, she died at the ripe age of 111.
Her body would lie in state for four days for people from across the country and beyond to pay their last respect.

The President, Nana Addo Dankwah Akufo-Addo, former Presidents Jerry John Rawlings, John Agyekum Kufuor, John Dramani Mahama and other dignitaries are expected to attend the funeral to commiserate with Asanteman at some point in time.
Security is tight – strong presence of police and military officers, as the large crowd of people clad in black and red, signifying their somber mood, stood in long snaking queues to file past the body.

The beauty of Asante royal funeral was at full blast with traditional drummers and dancers putting up intricate performances amid the clattering of executioner’s swords.

The air is intermittently filled with deafening sounds of the firing of musketry, while the traditional priests and priestesses do their own things – esoteric rituals.

Teams of health professionals alongside the Red Cross Society and the Saint John’s Ambulance and the Ghana National Fire Service are also on hand to respond to any emergency.

‘The mortal remains of the late Asantehemaa would be laid to rest at the Royal Mausoleum at Bremang, deep in the night on Thursday.