Profile of second batch of ministers-designate

January 12, 2017 Politics Comments Off on Profile of second batch of ministers-designate

The Ghana News Agency hereby submits the brief profiles of the 12 nominees.

He is the current Ranking Member for the Committee on Finance, and a member of the committee of Interior and Defence.

Anthony Akoto Osei has been described “as one of the finest Economist in recent years” acquiring his experience from providing consultancy services for the World Bank (Korea Division) in 1987, teaching at Dillard and Howard Universities from 1984 to 1995 as an Associate Professor in Economics and as a Research Fellow for the Centre for Policy Analysis (CEPA) from 1996-2001 in Ghana.

Dan Botwe is 58 years old, and a product of the Kwame Nkrumah University of Science  and Technology, graduating with a Bachelor of Science degree in Computer Science in 1984. He worked as a computer analyst at the Ghana Cocoa Board from 1985 to 1993, before moving into private business as Director of DanMaud Ltd and Palb Pharmaceuticals.

His political career began on KNUST campus, when he was elected National Secretary of the National Union of Ghana Students (NUGS) in 1982. As a member of the interim executive of the national youth wing during the formation of the NPP, he was later on appointed Director of operations and research at NPP headquarters from 1996 to 1998. In 1998 he was elected as the General Secretary of the NPP and re-elected for a second term in 2001.

In 2005, he was appointed as Minister of information by President John Agyekum Kufuor. Dan was elected in 2008 as the Member of Parliament for the Okere constituency, a position he holds till date. From 2013-2016 he was made Minority Chief Whip of the 6th Parliament.

Professor Kwabena Frimpong-Boateng is 67 years old. He graduated from the University of Ghana Medical School in 1975

with MB, ChB degrees, and qualified as a as general surgeon, cardiothoracic and vascular surgeon after undertaking his postgraduate studies at the Hannover Medical University, Germany in 1978. He subsequently worked as a consultant cardiothoracic surgeon and was one of the pioneers of the heart transplantation programme in Hannover. In 1985, he was recognized as the first black person to perform a heart transplant. He returned home in 1989 to establish the National Cardiothoracic Centre and the Ghana Heart Foundation.

He was a former CEO of the Korle-Bu Teaching Hospital, past President of the Ghana Red Cross Society and immediate past Chairman of the Public Utility Regulatory Commission (PURC). He established the National Cardiothoracic Centre at the Korle Bu Teaching Hospital and was its founding Director. Currently, he is the President of the Ghana Heart Foundation.

Prof. Frimpong-Boateng has received several local and international awards in recognition of his medical work and service to humanity. In 1999 he was the Ghana Chartered Institute of Marketing’s Marketing Man of the year and also, a recipient of the Millennium Excellence Award.  In 2005 the Millennium Excellence Foundation awarded him as Personality of the Decade. Prof. Frimpong-Boateng was the winner of the 2012 edition of the prestigious African Heroes Award, presented by Ohio University in Athens, Ohio, USA, on February 12, 2012.

Prof. Frimpong-Boateng is married and has five children.

John-Peter Amewu is 48 years old, and holds an MBA (Finance) from University of Ghana. He also has a Post Graduate Degree (Executive MBA in International Energy Industry Management), and Masters in Petroleum Law and Policy from University of Dundee (UK).

He has more than 15 years’ experience in Government, Private Sector, Civil Society and International Development Organizations. He has participated and undergone several mining professional training and attained various certificates from some Australia’s prestigious Universities (University of Sydney and University of Western Australia).

He is a Cost Engineer by profession with broader knowledge in the Energy and Mining Industry. He is a Co-founder of Africa Center for Energy Policy – ACEP; and also worked as the Director of Policy and Research where he provided pro-active and comprehensive policy related advice to support a variety of Government and Private Sector Projects.

He is the Chairman of Board of Directors of major private institutions in Ghana and a professional international consultant in his area of expertise (Mining and Petroleum). His contributions in providing solutions to the problems in the Energy Sector in Ghana have earned him both local and international acclamation and recognition.

He is currently the Regional Chairman of the New Patriotic Party (NPP) in the Volta Region.

Otiko Afisah Djaba is 54 years old. She studied Information Systems in the UK, communications in Egypt and holds a

She also was the National Facilitator for the Campaign for Greater Discipline under Former Vice President Aliu Mahama in 2004. She worked as a Consultant in Children’s Rights and rural women’s development for Plan Ghana in extremely deprived rural communities in Sissala districts and in Wa. In 2008 she was the NPP Parliamentary Candidate for the Bole-Bamboi constituency, and is currently the Women’s leader of the New Patriotic Party and has held the position since 2010. She is a polyglot, who speaks 8 Ghanaian dialects.

She has four children.

Ignatius Baffuor Awuah is 51 years old, and hails from Nsoatre in the Brong Ahafo Region. He is a graduate of the University of Ghana, Legon, where he obtained a Bachelor of Science degree in Administration (Accounting option). He also holds a post-graduate diploma in management (IPMA) London, and certificate in Civil Service Management from the Galilee College, Israel. From 1996 to 2001, he worked as the Operations Manager at Nsoatreman Rural Bank 1996-2001; Municipal Chief Executive of Sunyani from 2001 to 2005; before being appointed Deputy Brong Ahafo Regional Minister by President Kufuor between 2005-2006 and landed the top job in the region in 2006, when he was appointed Brong Ahafo Regional Minister.

Mr. Kwaku Ofori Asiamah is 47 years old. He is a graduate of University of Cape Coast and holds a Bachelor of Commerce

degree. After his National service with Ghana Ports and Harbours Authority, Tema, in 2000, he worked as Marketing Manager at Household Aluminium Company Ltd. He has also worked at Quest Resource Development Consultancy Ltd, and General Manager of Josa Plus Ventures.

Joe Ghartey is 55 years old, and a graduate of the University of Ghana, where he obtained an LLB (Hons) in 1986, before being called to the Bar in Ghana in 1988. He then joined the Law Firm of Akufo-Addo, Prempeh & Co. as a Pupil and subsequently became an Associate. In 1995, he founded his own law firm, Ghartey & Ghartey.

He is married with five children.

Kwasi Amoako-Atta is 65 years old. He obtained a Bachelor of Science degree in  Administration, and was called to the

Ghana Bar in 2002. In 2004, he obtained an Executive Masters in Business Administration (EMBA).

He worked with the then Meat Marketing Board from 1979-1985 as a Marketing Manager. He also joined Unilever in 1985, and over a 20 year period occupied very senior management positions such as Head of Department in Sales, Marketing and Logistics. He is currently the Member of Parliament for Atiwa West. 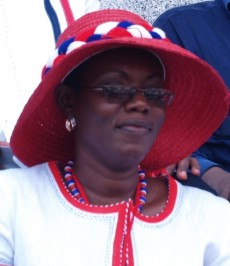 Ursula Owusu Ekuful is 52 years old, and a product of the University of Ghana And The Ghana School of Law. She was called to the Ghana Bar in October 1990. She also holds a certificate in Government Integrity from the International Law Institute, Washington DC, a Project Management and Planning Certificate from GIMPA, and a Masters in Conflict Peace and Security from the Kofi Annan International Peacekeeping Training Centre, and was adjudged the overall best student in 2015.

She worked for 10 years as an Associate at Akufo-Addo, Prempeh & Co., Legal Practitioners and Notaries Public. From Sept 2005 to May 2008, she was was the acting Managing Director, Western Telesystems (Westel), and from April 2008 to January 2009, she was the Corporate and External Affairs Director, ZAIN Ghana. She has also been the NPP Member of Parliament for the Ablekuma West Constituency since 2012.

In the run-up to the December 7, 2016 elections, she served as the Chairperson for the Social Development Sector Committee – a committee responsible for the development of policy interventions for women, children, persons with disability, the aged and all social intervention policies and programs for the NPP manifesto 2016.

She is married and has one child.

Kofi Adda is 60 years old. He holds a Bachelor of Science degree in Economics and  Political Science from the Indiana Wesleyan Univerity, USA; a Masters in International Affairs (specialising in International Finance and Banking); and a Certificate in Energy Economics from the University of Texas. He was a Project Manager for the Public Financial Management Reform Programme of the World Bank and Ministry of Finance from 1996-2000; Client Service Director and Manager at Deloitte and Touche; amongst others.

He is the Member of Parliament for Navrongo Central, and is married with two children.

Samuel Atta Akyea is 53 years old. He was called to the Ghana Bar in 1993. He has worked at the Attorney General’s Department, at Akufo-Addo Prempeh & Co. He has been at Zoe, Akyea & Co., for a period of 14 years. He has been a Member of Parliament for Abuakwa South since January 2009. He has served on the Finance, Public Accounts Judiciary and Appointments Committees of Parliament.