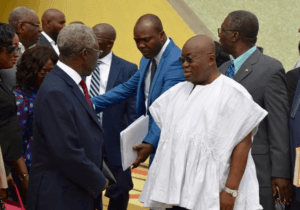 President Nana Addo Dankwa Akufo-Addo on his first working day at the Flagstaff House was presented an interim transition report by the Government’s side of the transition team.

The interim report, covering 24 sectors of the economy, is an Executive Summary of matters that the transition team dealt with in the course of their work.

The team’s six-week mandate expires on February 3.  The final report of the transition team is expected to be delivered to the President on February 10.

President Akufo-Addo Addo commended the team for the initiative, noting it was appropriate that he got apprised with the issues that would confront his government, especially on his first day at work.

“I thank you for the work you are doing. It is work for the people of Ghana…We will look at the report and call for clarifications when needed,” he told the team.

“It’s a good initiative. I would be better prepared to set things in motion as a result of the work you have done.”

President Akufo-Addo however queried why he was being given a one-sided report when the transition team was composed of two groups comprising his government side and those from the former adminstration.

Leader of government’s side of the team, Mr Yaw Osafo Marfo, a Banker and Former Finance Minister, explained that the report presented was the work of the government side which the team was bringing to his attention.

He said the report itemised issues and things that should engage the government in the first 100 days of President Akufo-Addo’s administration.

“The report is informative and useful for your administration to hit the ground running,” he told President Akufo-Addo.