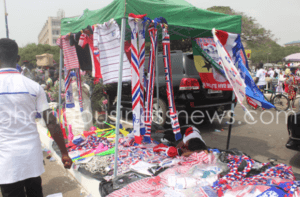 Many traders, on Saturday, took advantage of the large crowd that gathered at the Black Star Square for the swearing-in ceremony of Nana Addo Dankwa Akufo-Addo as President, to make brisk business.

They sold various items beautifully designed with the colours of the New Patriotic Party (NPP) of Blue, Red and White, but made marginal sales from those in the national colours of Red, Yellow and Green.

Some food vendors also cashed in on the moment selling waakye, kenkey and fried fish, rice and stew, among others, with some branding them as NPP products.

Many photographers from various parts of the country did not miss the out on the trade boom as many NPP supporters and sympathisers, who had dressed in interesting designs and styles, wanted photographic memories for historic purposes.

Madam Kande Amadu from Kumasi, who trades in NPP paraphernalia, told the Ghana News Agency that she arrived, in Accra, on Friday, to secure a place on the pavement for her wares.

She said business had been good despite many people selling similar products.

Kwasi Amoako from Kasoa who sells smocks designed with NPP colours, however, said business had been slow and attributed it to the many people trading in the same products.

He said he sold adults smock at GH¢70, while that of children were sold between GH¢10 and GH¢15, depending on the size.

Gabriel Akono, a photographer from Ashaiman, said a seven inch by five inch picture was GH¢5, with an A3 sized photograph costing GH¢15, while an A4 size picture went for GH¢10.

Most of the photographers printed the pictures within a few minutes and gave them to their patrons, while some designed the pictures in a form of calendar.

Madam Akosua Ampoma, an NPP supporter, from Bonwire in the Ashanti Region, who was wearing an “Onaapo cloth”, told the GNA that she arrived at the ceremonial grounds around 0300 hours in order to secure a comfortable place to sit.

She said she came purposely because of the love she had for Nana Akufo-Addo and the Party and expressed optimism that the Akufo-Addo Government would deliver and rescue Ghanaians from economic deprivation.

According to her, she took photographs so that she could show them to her children in the future.