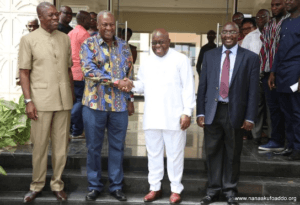 It was a delight to watch, when President John Dramani Mahama and President -elect Nana Addo Dankwa Akufo-Addo met at the Flagstaff House as part of the on-going transition exercise.

The meeting at the Presidency was at the behest of President Mahama whose objective was to conduct President-elect Nana Addo Dankwa Akufo-Addo to various departments and offices at the Flagstaff House, Kanda.

Before the rounds, President Mahama said Ghana had earned an enviable reputation in Africa and beyond and this year’s general election demonstrated the willingness of Ghanaians to deepen it further.

He said since the December 7 polls, both the National Democratic Congress administration and the incoming New Patriotic Party had exhibited maturity and tact that would linger on the political history of the country forever.

President Mahama said: “Governments will always come and go, but Ghana must always progress for our benefit”.

The President said the introduction of the President-elect would give him an idea of the happenings at the Presidency and make Ghana an admirable country in the international world.

President-elect Nana Addo Dankwa Akufo-Addo promised that his administration would work hard to make the interest of Ghanaians the main focus.

He said the world would once again applause Ghana for the decent transition and he would ensure that the institutions are strengthened to take up future challenges.

“I want to thank you and all Ghanaians for the cooperation we received since the December 7 to date, and I will do everything possible to enrich the democracy we are enjoying,” he added.

Both President Mahama and President-elect Nana Akufo-Addo introduced some of the officials they had been working with over the years.