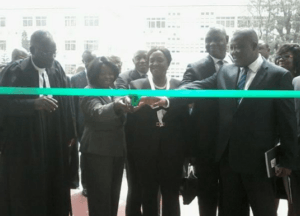 The Chief Justice (CJ), Georgina Theodora Wood, on Tuesday, urged the Government to provide funds for building new court houses, and for renovating and refurbishing the old ones.

She said it would provide the requisite work environment for the administration of justice, adding that most court houses across the country did not inspire much public confidence, as they remained in deplorable conditions.

Speaking at the inauguration of the renovated Supreme Court and Court of Appeal Building, she explained that that situation hampered the administration of justice and undermined the fundamental right of access to justice.

Chief Justice Wood said although justice was founded on the integrity and legal capabilities of those who administered it, the building and physical space from, which justice was administered added to the trust and confidence issues.

The importance of the Third Branch of Government in the socio-economic development of the nation, she said, could not be underestimated, adding that judicial reform initiatives were really geared towards the national goal.

Giving the background of the Supreme Court Building, she said the construction of the monument, with its large and elegant ionic columns, began in 1927 and was completed in 1929, accommodating only four main purpose built court rooms, which served as templates of justice from which some of the best and finest judicial minds and legal brains of the nation administered justice.

She said for close to nine decades the building had successfully served as the nerve centre of the operations of the Judiciary, contributing in no small measure to the sustenance of the rule of law and the stability of the nation.

However, she said, the building had not received any interior renovation since its inauguration in 1929.

“This necessitated a major renovation of the ‘look and feel’ of these court rooms, conference rooms to reflect their dignity and proper role in the hierarchy of the administration of justice, whilst providing a modern working environment for the Justices and court room staff,” she explained.

She stated that the advantages of a modern, user friendly, safe and conducive work environment were very laudable so the investments, especially to improve the quality of justice delivery of the two very important second instance courts.

Chief Justice Wood said all these modifications, which started in August 2016 and ended in December 2016, were done without compromising the building’s Victorian architecture, with the entire work being financed through Internally Generated Funds.

She gave the assurance that they would continue with the other phases of renovation by carrying out works on the whole of the fourth floor, which accommodated the former Supreme Court, a number of offices, which served as Judges’ Chambers and other offices.

It also housed the Supreme Court Library, while the ground floor housed the Judicial Service Clinic Annex, among others.

She pledged on behalf of the Judiciary to continue to improve their work and deliver with integrity, firmness, fairness and courage, saying effective justice administration is a collective responsibility of all citizens, the Bench, and the Bar.

The Chief Justice also expressed appreciation to the Judiciary for their patience and understanding during the renovation, and appealed to all to be law abiding, resist the temptation of flouting court orders with impunity and use legal processes to address their grievances.

Later, a citation and presentation was made in honour of Justice J. B. Akamba, a Justice of the Supreme Court, on his retirement, in recognition of his 40 years service and contribution to the Judiciary and the Judicial Service.

Facebook Twitter WhatsApp LinkedIn
2017-01-04
Emmanuel Dogbevi
Previous Russian businesses to explore opportunities in Ghana
Next Sub-Sahara Africa gets $13.3b of financing from World Bank in 2016