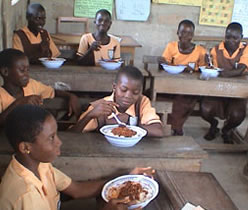 A Nutritionist, Ms Eunice Amiyuure, has urged government to make the School Feeding Programme more vibrant to help address malnutrition problems among pupils, particularly those in the northern parts of the country.
Ms Amiyuure was speaking at a stakeholder’s forum in Bolgatanga to tackle issues like malnutrition, exclusive breast feeding, early and forced marriages and open defecation.
It was organised by the Integrated Youth Needs and Welfare (INTYON) with support from UNICEF and attracted students, teachers, officials from the Ghana Education Service, Department of Children, and the Media among others.
Ms Amiyuure, who attributed the poor performance of pupils to malnutrition, said the phenomenon was worse in the Northern, Upper East and Upper West regions.
Whilst lauding the efforts of successive governments for introducing the School Feeding Programme to help combat malnutrition among school children, Ms Amiyuure called on the Government to resource and empower caterers under the programme to ensure that they provided balanced diet for the children.
She urged parents to provide food items such as beans, bambara beans, millet and maize which are rich in nutrients and could help balance the nutritional needs of their children.
Ms Amiyuure cautioned parents to desist from being extravagant in their social lives, especially during funerals, and rather ensure that their children’s basic needs were met.
She said the Municipal Health Directorate was working hard to change attitudes of parents to pay more attention to their children’s nutritional needs.
Ms Mary Alosum Anachinaba, a facilitator, entreated the students to become ambassadors of healthy living by educating community members and schools to live good and health lifestyles.
She urged them to clean their environment and shun away from negative practices like early and forced marriages and open defecation.
Gukpe Dungu YepalsinaIssah Ibrahim, the Executive Director of INTYON, said his outfit adopted Bahaviour Change Communication as a module to tackle some of the health and social challenges confronting the region.
Mr Hillary Adongo , the Project Coordinator  of INTYON, said the project was targeting the pupils because they were powerful tools for change and  impressed upon the teachers to guide them in their endeavours.
Source: GNA