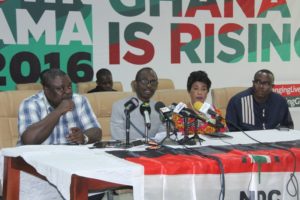 The National Democratic Congress (NDC) has constituted a 13-member National Review Committee (NEC) to investigate the party’s poor performance in the 2016 General Election.

The committee chaired by Professor Kwesi Botchway, a former Minister of Finance, is tasked to conduct a comprehensive review of the planning, execution and the outcomes of the Party’s campaign and participation in the elections with a view to establishing what went wrong in order to guide the NDC’s activities moving into the future.

It is also to review and validate the results of the 2016 Presidential and Parliamentary Elections; to find out the causes of the poor performance of the NDC; deal with any other matter reasonably related to the objectives, and make recommendations to the NEC about the way forward.

Mr Johnson Kwadwo Asiedu Nketia, the General Secretary of the NDC, who announced this at a press briefing in Accra, said the decision was taken at the Party’s NEC meeting to give all members equal opportunity of addressing their views.

He said the Committee, which would commence work on January 5, 2017 would submit its report within 90 days.

The General Secretary said during the course of its work, the Committee was expected to conduct hearings among the rank and file of the Party across the country, to afford members the opportunity to express their views about all the issues under review and to participate in the reshaping of the NDC to meet the challenges ahead.

“The National Executive Committee wishes to advise all members of the Party to desist from all the on-going blame games both in the traditional and social media and to channel their views through the Committee for redress.

“Finally, the NEC wishes to urge all members to stand firm and united during these challenging times in the life of the party and to keep in mind that the future of our Party depends on how effectively we respond to the current difficulties,” he added.

Mr Asiedu Nketia said as they strive to understand the challenges that confronted them, they must maintain their discipline as a Party.

“Party discipline must remain supreme at all times,” he stressed.

The NDC lost the December 7 Elections to the main opposition party, New Patriotic Party by a margin of about one million plus.