We are determined to collect our $25,000 – Samira Suleman 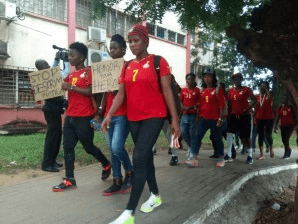 Black Queens midfielder Samira Suleman has said they are bent on collecting their $25,000 bonuses owed dated from the Olympic qualifier, All Africa Games and the recent 2016 Women’s African Cup of Nations tournament held in Cameroon.

The playing body yesterday embarked on a demonstration which started at the premises of the Ghana Football Association (GFA) through to the Ministry of Youth and Sports to meet the sector Minister, Nii Lantey Vanderpuye over unpaid bonuses.

They protested to the Sports Ministry for the poor treatments, holding placards with inscriptions such as ‘honour your heroes’ and ‘stop the discrimination’

However, they were fruitless in their chase for their money.

According to Suleman who was remarkable in the recent Africa Women’s Cup of Nations, there was an earlier arrangement for them to collect their bonuses on Thursday, December 22 but nothing has been said about it again hence the demonstration.

“They owe us 25,000 dollars and the arrangement was for us to come for our money on Thursday. We are here now and we still don’t have our money. They told us that the GFA will take us to the Sports Ministry at 2pm but we told them we can’t wait because that has been the story for all these while. We therefore decided to come to parliament ourselves to try and see the minister.

This unfair treatment according to Suleman has demoralized the team. “When I listen to my colleagues, they’re always saying the way women’s football is going in Ghana now, they don’t think they are going to play again.”

Adding that, there’s no appreciation for all the efforts they put in making the country proud.

Ghana placed third in the just ended Women’s Championship however, the playing body and the technical team have not been paid their winning bonuses.