NDI calls on EC to expedite its work to diffuse tension 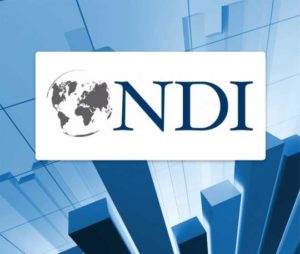 The National Democratic Institute (NDI) international election observation mission has called on the Electoral Commission (EC) to expedite its work and increase communication to the public to diffuse any tension.

The group led by Amb. Johnnie Carson, former assistant secretary for African Affairs, US State Department stated at a press briefing in Accra monitored by ghanabusinessnews.com that in a context of politically charged environment and to avoid crisis the EC should expedite its work.

The delegation also called on the political parties to cooperate with the EC in good faith to urge supporters to respond peacefully to the EC’s announcement of election results in the spirit of the Accra declaration.

Johnnie Carson said “Political parties should seek redress through legal avenues should there be a reason for electoral complaints or disputes.”

The delegation urged election stakeholders to address immediate challenges during the consolidation of results and to apply lessons learnt from the 2016 polls to future elections.

He also observed that “Although Ghana’s democracy appears to be strong this election also has revealed weaknesses that need to be addressed such as media abuse of press freedom including hate speech, lack of opportunities for women political leadership participation and the need to address issues of corruption is noted during the campaign.

In the spirit of international cooperation the delegation offers recommendation to Ghanaian electoral stakeholders,” he said.

Political parties must call publicly on their supporters to respond peacefully to the EC’s pronouncement of the election results and to seek redress in legal avenues should there be a reason for electoral complaints or disputes.

Mitigate political polarization and conflicts between parties, by creating mechanisms for ongoing dialogue across party lines both in and outside of the normal legislative contest.

Organise a thorough post-election review of the conduct of the 2016 election and adopting appropriate recommendation to retain and consolidate the best practices.

Initiate electoral reforms early in the next legislation

By: Pamela Ofori-Boateng
Copyright © 2016 by Creative Imaginations Publicity
All rights reserved. This news item or any portion thereof may not be reproduced or used in any manner whatsoever without the express written permission of the publisher except for the use of brief quotations in reviews.