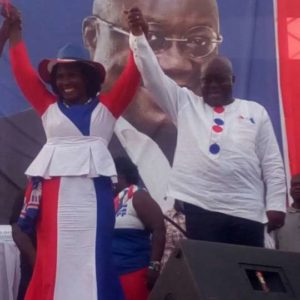 Nana Akua Owusu Afriyeh, the parliamentary candidate of the New Patriotic Party (NPP), has been declared as the Member of Parliament for the Ablekuma North.

She won with a total of 54, 698 as against her fiercest contender Sally Amaki Darko Attoppe of the National Democratic Congress (NDC) who polled 26, 813 votes.

Speaking to the press, Mrs Afriyeh said she was happy that what turned out to be a rancorous campaign has ended and she has been declared the winner with a margin of about 29, 000 votes as compared to the 22, 000 votes garnered by the Party in 2012.

The announcement of the presidential results saw the CPP’s Ivor Green obtaining 45 votes while the National Democratic Party obtained 42 votes.

The Progressive Peoples Party obtained 487 while Edward Nasigri Mahama of the Peoples National Convention had 17 votes.

The only Independent candidate managed to secure 12 votes for himself.

The total valid vote for the presidential election was 82, 001, whilst the rejected ballot were 365.