Public not allowed at collation centre 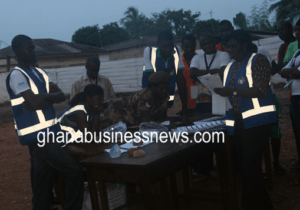 The Electoral Commission’s office in the Ninigo-Prampram District says unauthorised persons would not be allowed into the constituency’s collation centre after voting on December 7.

Mr Botchey Junior said party supporters and the public would not be allowed at the Ningo Police station collation centre announcing that tough security measures have been put in place to deal with recalcitrant people.

It could be recalled that in the 2012 general elections, some residents of Ningo who were not happy about the win of Mr Enoch Teye Mensah over their preferred candidate, Mr Sylvester Tetteh thronged the collation centre, and threw stones to express their displeasure at the turn of event.

He explained that party agents assigned to the collation centre, parliamentary candidates, and electoral officials were the only people expected to be inside the centre stating however that the tabulation of results would be projected on a screen to be mounted at the Old-Ningo DA School, a few metres away from the police station.

He therefore advised residents who were interested in monitoring the result to gather at the school park instead of the collation centre.

The Electoral Officer reminded political parties to give copies of signed accredited letters to their party agents as those without it would be prevented from observing activities at the various polling centres.

He also urged other observers to hang their accreditation cards around their necks for easy identification and reminded them to introduce themselves to presiding officers at the centres.

To the security officers to be deployed to the centres, he cautioned them against checking of electorates ID, influencing people’s vote, getting involved in the administering of the election, counting of ballots and favouring of a political party.