December 2, 2016 General News Comments Off on Construction of bridge over Birim River begins 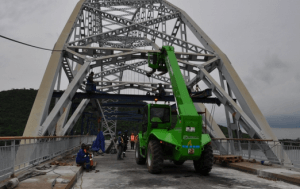 A ceremony has been performed to mark the start of construction of a bridge over the Birim River to link Akwatia with Kusi in the Denkyembour District.

The project, which is expected to be ready within nine months, would significantly shorten the travel distance to Akwatia, the district capital, from Takroase, Soabe, Akyem-Wenchi and other communities.

It would not only allow people from those places to access quality healthcare but also help to give a boost to the economic activities of the people.
The bridge is one of the 19 being built across the nation with a loan from the Spanish government.

Mrs. Marietta Brew Appiah-Oppong, the Attorney General and Minister of Justice, who was on hand to perform the ceremony, said it was a dream come true.

She indicated that the economic benefits would be enormous and urged the contractors, Horinsa Construction Limited, to do everything to meet the deadline.

They should again make sure they did quality job – to ensure value for money, she added.
The District Chief Executive, Mr. Kwaku Ofori-Abrokwaa, described the project as another milestone in the development of the area.

He asked the people to cooperate and give every needed support to the contractors for successful completion of the project.